Withdrawing From the INF Treaty: Consequences and Costs 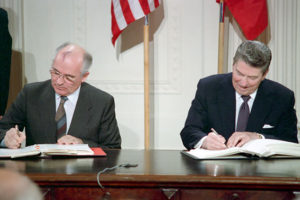 The opinions of Belfer Center experts, as reprinted below, were originally published by Harvard’s Belfer Center for Science and International Affairs. We have supplemented these with opinions from three highly regarded Moscow-based experts, translated from various Russian-language sources (last three entries).

News reports say the U.S. intends to withdraw from the INF to meet the growing threat from China, in particular its anti-ship missiles. But the threats from the China could be met with ship-borne anti-missile systems and ultimately with sea-launched nuclear missiles to destroy Chinese missile bases. Deployment of ground-based nuclear missiles in violation of the INF would not be necessary. The logical place for such deployment may be Japan. But the political hurdle against such deployment in Japan is very high and it would be unrealistic.

The INF Treaty is one of the last pillars of U.S.-Russian nuclear arms control, which has reduced nuclear dangers for half a century. Rather than pulling out of the INF treaty over Russian violations, President Trump should cut a bigger deal that includes Russia dismantling its prohibited missile, the United States addressing Russia’s concerns, both sides extending New START (while ensuring that it covers Russia’s new nuclear weapons) and launching talks on follow-on accords to address today’s stability challenges, from nuclear weapons to cyber and space. Letting the whole structure of nuclear arms control collapse would bring the world closer to the nuclear brink, roil U.S. alliances and undermine the global effort to stem the spread of nuclear weapons.

I was extensively involved in Track 2 discussions with the Russians that helped lead to the successful negotiation of the INF Treaty in the mid-1980s. That treaty helped prevent a costly and destabilizing arms race in intermediate-range nuclear forces then and has continued to do so since. Russian violations should be addressed by diplomacy, not by abandoning the treaty. And the United States should try to address the fact that China is not a party by negotiating a new treaty with that country or with China and Russia. Needlessly losing the first-ever treaty to ban a whole class of nuclear forces in the arsenals of the preeminent nuclear-weapon powers would be a debacle.

Russia violated the INF Treaty. Instead of holding Moscow responsible and working to bring it back into compliance, President Trump is walking away. This will free Moscow to deploy currently prohibited missiles without any legal constraint, while blaming the United States for the collapse of a pillar of strategic stability. The withdrawal will further divide the United States from our allies, who were not consulted. Several allies are now protesting. Does the U.S. military need this? No. At least according to the vice chairman of the Joint Chiefs. Trump’s decision is another major strategic blunder—bringing the United States and the world closer to an avoidable nuclear crisis.

Russia has been violating the INF Treaty for years. A strong U.S. response is long overdue. However, President Trump’s decision to withdraw abruptly from the treaty without consulting Congress or U.S. allies undermines U.S. security. In the aftermath of President Trump’s unilateral decision, U.S. credibility and NATO cohesion are lowered, and the U.S. and our NATO allies are less safe. Russian President Vladimir Putin has received a free pass to deploy large numbers of nuclear-tipped missiles against Europe and blame the U.S.

After many decades, the specter of nuclear war in Europe has reappeared. It is essential that the Trump administration not repeat the mistakes of the Cold War that brought the world to the brink of nuclear war. Withdrawal from the INF Treaty frees Russia up to threaten Europe with nuclear weapons without any political cost. While Russia has deployed nuclear systems banned in the treaty, it is the United States that will take the blame for INF’s demise, making further arms control progress more difficult. The lesson of the Cold War was that diplomacy and arms control agreements that focused on transparency and predictability reduce nuclear dangers. Saber-rattling and abandonment of these principles increase dangers for the United States and the world.

In July at an arms control conference in Moscow the consensus among the experts was that the U.S. and Russia can no longer conduct arms control using the Cold War model (i.e., simply reducing offensive missiles bilaterally). That approach doesn’t address all the other new strategic arms issues: new warheads, precision-guidance systems, hyper-velocity systems, BMD, drones, lasers, space-based platforms, cyber, multiple nuclear states and the perennial “tactical nukes” (which are the kind of systems the INF Treaty covers). The U.S. and Russia should not be focused on saving the INF Treaty but on creating this new paradigm we need going forward. President Trump can “save the situation” if he proposes this new discussion as a follow up to leaving INF.

The Trump administration is legally justified in withdrawing from the INF Treaty because Russia has deployed a missile specifically banned by the treaty. However, it would be much smarter to first attempt to negotiate a resolution (which Russia has indicated it is prepared to consider) and then withdraw if Russia rejects a reasonable offer. By withdrawing without making a good faith effort to save the treaty, the Trump administration is needlessly antagonizing our NATO allies.

Ongoing Russian violations of the INF Treaty need to be thoroughly addressed within the context of a broader U.S.-Russian initiative to strengthen strategic stability. However, the nearly simultaneous news that the current president may also choose to withdraw from New START is an example of illogical thinking that will undermine rather than enhance nuclear security. Indeed, multiple withdrawals from international agreements and treaties-and threats to withdraw from even more-devalue the word of the United States in current and future negotiations, reduce confidence in existing American commitments around the world, diminish deterrence and embolden our adversaries.

It is too soon to tell whether or not the apparent decision to withdraw from the INF Treaty is sensible. If it is part of a strategy to engage Russia comprehensively on nuclear forces issues, including Russia’s violation of the treaty and deployment of new types of weapons, it would be a welcome development. If it is a step toward dismantling all bilateral arms control agreements, it would diminish U.S. security by ending valuable verification mechanisms and potentially sparking a destabilizing competition. (Russia’s criticism is disingenuous; Moscow twice suggested joint withdrawal from the treaty during the George W. Bush administration.)

Arbatov told Interfax on Oct. 21 that the existing system of nuclear arms control could collapse if the U.S. withdraws from the INF Treaty. “Both parties to the treaty have mutual complaints about violations [by the other party],” Arbatov said. “In all likelihood, these complaints are technical,” but due to “the current political tensions” they have become highly political, serving as “a pretext for … a campaign against Russia” in the U.S., he said. Arbatov added that a more favorable political situation would have allowed the sides to discuss their differences in technical terms and reach an agreement on additional verification measures in order to allay any mutual suspicions. Instead, “the sides have been trading accusations for the past few years. And the U.S., which feels more confident, and the Trump administration do not have an interest in previously reached agreements. There [in the U.S.] there are ardent opponents of these agreements, including [U.S. National Security Advisor John] Bolton… The consequences could be most lamentable: This system [of nuclear arms control] could collapse completely and we will find ourselves in a new cycle of the arms race. Moreover, that cycle would not be bilateral but multilateral because it will now include China, India, Pakistan and other countries. New nuclear states could emerge as a result of the collapse of the nonproliferation system.” Arbatov noted that such an arms race could spread to outer space, cyberspace and non-nuclear weapons systems and called for innovative thinking on ways to avert the termination of the New START Treaty.

Academic Dean, Institute for the Study of the U.S.A. and Canada, Russian Academy of Sciences

Rogov told the Zvezda weekly on Oct. 23 that Bolton’s visit to Moscow should make it clear whether Washington genuinely intends to withdraw from the treaty within six months or wants to use the situation as leverage “to achieve some sort of agreement. … There is no question that Trump does not have a good grasp of international security issues,” Rogov said. “He relies on the opinion of his circle [of advisors]” and Bolton’s “position is absolutely clear: He has always opposed any arms control agreements. The Pentagon holds a more moderate position. As strange as it may be, it’s the Pentagon that could come out in favor of preserving existing agreements.”

Trenin wrote on his center’s website on Oct. 22 that the main effect of a U.S. withdrawal from the INF Treaty would be to free up Washington’s hand in intimidating North Korea and exerting pressure on China. “If talks on de-nuclearizing North Korea fail … then the U.S. will return to a policy purely based on force in dealing with the DPRK and will likely base its intermediate-range missiles in northeast Asia. The Pacific command of the U.S. armed forces has long been suggesting such an option,” Trenin wrote. He added that this would give Washington clear advantages in its standoff with China, but that for Russia the withdrawal would not create any “immediate problems.” What’s most important, Trenin believes, is what steps the U.S. will take next and on which strategic fronts.

Article also appeared at russiamatters.org/analysis/withdrawing-inf-treaty-consequences-and-costs with different images, bearing the notice: “© Russia Matters 2018 … This project has been made possible with support from Carnegie Corporation of New York,” with a footer heading entitled “Republication Guidelines” linking to: russiamatters.org/node/7406, which bears the notice, in part: