Those Russians Angry at Putin Not Necessarily Pro-Western and His Successor May Not Be Either, Kirillova Warns 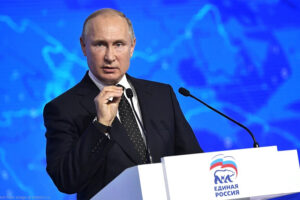 Those who are angry at Vladimir Putin and his failures at home and abroad are not necessarily pro-Western, Kseniya Kirillova says. Instead, many who object to the Kremlin leader’s approach may in fact want to see him replaced by someone even more authoritarian and hostile to the outside world.

That is often forgotten or down played by those who hope that the exit of Putin from the political Olympus in Moscow will inevitably result in the coming to power of someone more prepared to cooperate with other countries and more open to reform, the US-based Russian analyst says (dsnews.ua/world/novyy-stalin-chego-zhdat-ot-rossii-posle-putina-07122020-408528).

Not only is Putin continuing to marginalize any potential advocates of change, reducing the chances of the latter to challenge him now or replace him in the future, Kirillova continues, but opposition to him within Russia, which is growing, comes not just from those who want more freedom and better relations with the West but also from those who want less of each.

She observes that “despite the fact that the dissatisfaction of Russians with the actions of the authorities is consistently increasing, this does not in itself mean the growth of pro-Western attitudes. To the contrary, on issues of foreign policy, the majority still believes [the regime’s] propaganda” about “’a besieged fortress’” and is ready to support tougher measures.

For example, a new Levada Center poll finds that more than one in five Russians believes that the US and NATO were being the recent fighting over Qarabagh and an even larger share backs the dispatch of Russian forces there (levada.ru/2020/11/30/chto-dumayut-rossiyane-pro-konflikt-v-karabahe/).

Moreover, Kirillova says, Russian attitudes are increasingly acquiring a more left-of-center focus, something which “under conditions of ‘a time of troubles’ may lead to the rise of radical-left populists of a Bolshevik type.” That development too makes optimism about Putin’s replacement more difficult to sustain.

It is certainly true that the transfer of power beyond Putin “opens a window of possibilities for positive change.” But “repressive policies, the successful discrediting in the eyes of the population of all pro-Western forces, the growth of leftist attitudes and the preservation of an imperialist and isolationist vision of the world makes this window extremely narrow.”

For a more optimistic outcome, the West will have to take all this into consideration rather than assuming that there is something inevitable about an improvement in the Kremlin after Putin departs. It is entirely possible that the new leader could be even worse with regard to Russia and its relations with the West than Putin now is, Kirillova concludes.