(Bloomberg – bloomberg.com – Irina Reznik – January 12, 2016) He was one of the most powerful men in Russia for a decade, an old pal of the president who oversaw a million workers and a rail network spanning 11 time zones. But then Vladimir Yakunin was suddenly out, ending a career that included a stint as an intelligence officer […]

KALININGRAD. Aug 20 (Interfax) – It has been confirmed that Russian Railways (MOEX: RZHD) chief Vladimir Yakunin has the diplomatic rank of Ambassador Extraordinary and Plenipotentiary, Kaliningrad regional election commission chief Inessa Vinyavskaya wrote on her Facebook page. “In reply to the commission’s query as part of the verification of the information on V. I. Yakunin, the Russian Presidential Administration […]

Putin May Be Tiring of His Cronies

(Bloomberg – bloomberg.com – Leonid Bershidsky – August 18, 2015) Vladimir Yakunin seemed eternal: Nothing he could do appeared to undermine his standing in the system President Vladimir Putin has built to run Russia. Yet now he is leaving the top job at the national railroad monopoly, after 10 years of mismanaging it. Putin may be realizing that tough economic […]

(Moscow Times – themoscowtimes.com – Ivan Nechepurenko – August 18, 2015) Vladimir Yakunin, one of Russia’s most powerful executives and a close ally of President Vladimir Putin, was nominated as a senator for the upper chamber of the Russian parliament Monday, a position that would oblige him to step down as head of the state rail monopoly Russian Railways (RZD). […] 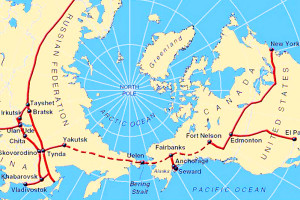 (Paul Goble – Window on Eurasia – Staunton, March 24, 2015) Even though the Russian government currently repairs less than one percent of its horrific roads in many regions, Moscow has announced plans to build a superhighway and rail line extending across the Russian north to the Bering Straits and a tunnel to Alaska, a project in which enormous sums will […]

(Moscow Times – themoscowtimes.com – Oleg Sukhov – April 3, 2014) One of President Vladimir Putin’s relatives, Roman Putin, has spoken out against alleged corruption at Russian Railways, a state company headed by one of the president’s closest allies. The criticism by Roman Putin, who has been accused by some of capitalizing on the president’s reputation by founding the Putin […]

(Moscow Times – themoscowtimes.com – Christopher Brennan – March 20, 2014) Opposition leader Alexei Navalny, currently under house arrest in connection with a criminal case against him, has written an op-ed for the New York Times in which he calls for sanctions on officials and businessmen connected to President Vladimir Putin. Saying that previous U.S. and EU sanctions in response […]