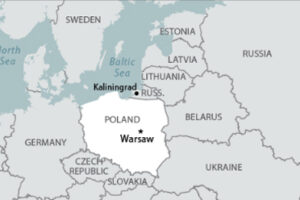 (Jamestown Foundation – jamestown.org – Eurasia Daily Monitor – Volume 18, Issue 166 – Paul Goble – Nov. 2, 2021) Since Soviet times, Russian analysts have mused about the possibility that Germany might try to recover Kaliningrad, or East Prussia as it was known before Joseph Stalin seized it at the end of World War II. Later, during the 1990s, […]

Russia and NATO are each building up their military capability across eastern Europe, spurred by the conflict in Ukraine …. For Russia, a strategic centerpiece is … Kaliningrad … a small piece of Russian territory sandwiched between NATO members Poland and Lithuania, allowing the Kremlin to project its military power into the alliance’s northern flank. … there was ample visible […]

KALININGRAD. Aug 20 (Interfax) – It has been confirmed that Russian Railways (MOEX: RZHD) chief Vladimir Yakunin has the diplomatic rank of Ambassador Extraordinary and Plenipotentiary, Kaliningrad regional election commission chief Inessa Vinyavskaya wrote on her Facebook page. “In reply to the commission’s query as part of the verification of the information on V. I. Yakunin, the Russian Presidential Administration […]

The Christian Science Monitor covers some of the interplay in Kaliningrad between Germanic cultural history and more recent Russian control, amidst Russia’s tensions with the West over Ukraine. … a growing movement of mainly younger Kaliningraders – supported by local government – … are working to roll back the Soviet-imposed amnesia that convinced generations of people who grew up on this ancient territory […]

NEWSWATCH Christian Science Monitor: Amid Kremlin-NATO tensions, what mood in Russia’s European ‘spearhead’? The Baltic enclave of Kaliningrad is home to a major naval base that weighs heavily in both Russian and Western military thinking 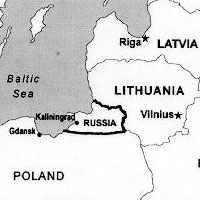 The Christian Science Monitor reports on Russia’s Baltic enclave Kaliningrad in the midst of stepped-up Russian and NATO military activity. If the tensions between Russia and the West should escalate into full-fledged confrontation, it is this former Prussian town – home to a huge military base in the heart of NATO country – that is going to be right at […]

(Bloomberg – bloomberg.com – Leonid Ragozin – May 11, 2015) Tanks and ballistic missiles lumbered past thousands of spectators gathered in Kaliningrad on Saturday to mark the 70th anniversary of the Allied victory in Europe, an historic triumph for Russia that the Kremlin has used to whip up a new nationalist fervor. “We need to show our enemies, who deem […]

(opendemocracy.net – Ola Cichowlas – January 7, 2014) Ola Cichowlas is a British-Polish freelance journalist. She covers Russian regional politics and the arts in provincial Russia. As Russia and the EU fight it out for Ukraine, Ola Cichowlas reports on a more positive initiative on another border, where Russians from Kaliningrad can travel to Gdansk in Poland to sample the […]

MOSCOW, December 16 (RIA Novosti) ­ Russia confirmed Monday that it has deployed tactical ballistic missiles near its borders with NATO but said the move did not violate international agreements. Bild newspaper in Germany reported over the weekend that Russia had “quietly” moved 10 Iskander-M (SS-26 Stone) missile systems into its Baltic exclave of Kaliningrad and along its border with […]