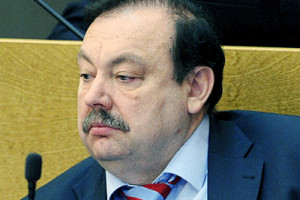 Kremlin claims notwithstanding, Russia has not reached “the bottom” of its current crisis because that crisis is systemic and not just the result of the decline in the price of oil and Western sanctions imposed in response to Moscow’s aggression in Ukraine, Gennady Gudkov says.

All sanctions have done, the Russian politician says, is intensity the impact of pre-existing problems and made it clear that “either they will force us to change the country or we will be converted into North Korea 2.0, where a half-naked and beaten people happily lives only to support its leader” (echo.msk.ru/blog/gudkov/1595054-echo/).

“When (and if) it becomes finally understood that it is impossible to change the authorities by democratic means and that any further participation in elections is senseless, part of the opposition will begin to seriously prepare itself for revolution and the overthrow of the authorities.”

In thinking about such a prospect, Gudkov suggests, one needs to remember that “such events almost always arise unexpectedly both for the revolutionaries and for the authorities themselves.” In 1991, the 20-million-strong CPSU disappeared overnight, and in February 1917, 300 years of tsarist rule “ended in an instant.”

Russians alas have “an enormous historical experience with revolutions,” he points out, and he adds that he hopes that one won’t be necessary. “But in certain historical circulations, it can be the ONLY means of removing the obstacles to Russia’s movement forward” especially if those in power show no understanding of what is going on.

The opposition politician begins his essay by observing that the economic decline of Russia is “hardly the result of sanctions of ‘the ring of enemies.'” It was “inevitable” even if Putin had not invaded Ukraine; and it is far broader than just the economy. Instead, Russia’s crisis is, as Gudkov has long insisted, “systemic.”

“The events in Ukraine and the actions of the West, shocked by the aggressive actions of its former partner – the Russian state – have only speeded up these processes,” although the sanctions have allowed the Kremlin to put up a propaganda smokescreen designed to hide its responsibility for the crisis and its nature.

The economy is not the only thing in crisis, he continues. Also there are “the political, social, and moral foundations of the state and society.” Money is fleeing Russia but so too are people, and the country’s “GDP, culture, education and medicine are all falling [while] crime, prices, mortality, alcoholism, and drug use are all growing.”

And this crisis extends down to the individual level: defenseless children and old people are being attacked, cruelty and sadism are spreading. This is the result of “the cowardice, silence and indifference” of the population and its unwillingness up to now to challenge those in power and the luxurious life the latter have provided for themselves but not the population.

No one can end a systemic crisis without changing the system, Gudkov says, “and “therefore in a SYSTEMIC CRISIS, there is no bottom: it will continue until the old system disappears and in its place appears a regime build on NEW PRINCIPLES and thus capable of securing the COUNTRY’S DEVELOPMENT.”

That shift could happen in either a “soft” or “hard” way. If the old system is taken apart “without wars and armed uprising, then after a short time the country will begin to really rise from its knees.” Indeed, Gudkov argues, “the variant of ‘a soft palace coup’ could be the first step to a broad agreement and reform of ‘the system.'”

But if it occurs in a “hard” way with “armed conflict, uprisings, revolutions and so on,” he suggests, there is “the risk of a civil war, even a very limited one” and then “‘the bottom’ of the crisis will come only at the completion of these tests and will be significantly ‘deeper’ than in the case of the soft variant.”

Sanctions are going to hit Russians ever harder over the coming months and possibly years, the opposition politician and commentator says. But no one should forget that “the sanctions were introduced IN RESPONSE to the actions of the Russian authorities” and not unilaterally and without cause.

As Russians come to an appreciation of where the blame lies, they are likely to realize that they have to take a position, but “of course, the Kremlin won’t sit by with crossed hands,” even though “it has ever less means to extend its undivided and eternal rule.”

In this situation, Gudkov suggests, “Putin will have either to immediately agree on a change of power with guarantees of his security or to go ‘to the end’ clearly understanding how all this really could end.” Personally, the commentator says, he “does not believe” that Putin will restore the GULAG and mass repressions – his regime is too corrupt for that.

But what the Kremlin leader may choose to do in this situation is to get Russia involved in an even larger war in Ukraine “and temporarily consolidate around his regime the ‘patriotic’ majority.” Doing that of course involves terrible risks especially since Russia could count on an almost “inevitable” defeat at the hands of a newly mobilized NATO.

What will happen and how deep “the bottom” of Russia’s crisis will be is likely to become clear soon, Gudkov concludes. The world is moving quickly and there is little likelihood that oil prices will rise enough to allow the current rulers of Russia to keep themselves afloat for long.