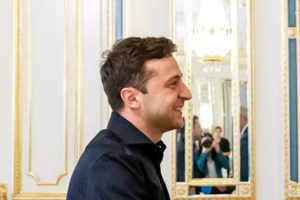 Vitaliy Syzov is chair of the Donetsk Institute of Information, an NGO working in the media field in Ukraine. He worked for ten years a journalist in regional and national media and graduated from the Political Science Department, History Faculty, at Donetsk National University in 2012.

The nascent defrosting of the Ukrainian-Russian peace talks, which resulted in a prisoner exchange long sought by Ukraine, runs the risk of remaining an isolated episode in an extended conflict rather than the first step toward resolving that conflict, or, at a minimum, achieving a cease-fire. This is the fundamental task that candidate Volodymyr Zelenskyy set for himself with regard to the peace process. “First of all, you need to stop shooting-just stop shooting!” he said in a pre-election interview.

The recent decisions of the new president indicate that stopping the shooting by any means is not a hollow goal. President Zelenskyy has declared his intention to make concessions to Russia on a number of issues sensitive to Moscow. As an example, without repealing the controversial law privileging the use of the Ukrainian language in education and most matters of state, a law adopted by the vast majority of MPs when the Verkhovna Rada was controlled by ex-president Petro Poroshenko’s political allies, Zelenskyy declared the need to introduce laws protecting national minorities’ right to use their languages in the official sphere. This decision was primarily aimed at Russian speakers in Ukraine’s South and East, where the language dominates, though almost half the population across the country use Russian in everyday matters.

The new president then declared neutrality in church affairs and stated that he did not intend to support any of the country’s many church communities. By contrast, former president Petro Poroshenko had considered the creation of the Orthodox Church of Ukraine, independent of the Moscow Patriarchate, one of the crowning achievements of his presidency. Thus, of Poroshenko’s campaign slogan “Army! Language! Faith!,” only “Army” remains under his successor-a situation not inappropriate for a secular state based on civil identity rather than religious or ethnic affiliation. The new president has doubled down on his stated intention to continue Ukraine’s defense against Russian aggression and to support the country’s armed forces.

Liberalization of the language laws, from Zelenskyy’s perspective, is not a step in the direction of Russia but an action aimed at rallying Ukrainian citizens, who are rather heterogeneous in origin, language, worldview, and religious profession. Civic unity was seriously tested by the previous presidential administration, which relied on a nationalist-minded electorate; that reliance, in turn, significantly contributed to Poroshenko’s party’s losses in the polls.

The new president needed quick and concrete results in the peace process. Therefore, Zelenskyy’s public rhetoric, which, on other matters, does not differ much from Poroshenko’s rhetoric, softened in regard to Russia. For example, during his speech in Kyiv on August 24, 2019, Ukraine’s Independence Day, the president alluded to a “neighbor” who had abducted two children-understood to be the Donbas and Crimea. It is notable that Zelenskyy tries not to mention Russia directly but constantly emphasizes its aggression.

When on August 4 Ukrainian soldiers were killed on the line of contact in the Donbas, President Zelenskyy called Russian president Vladimir Putin and demanded that he rein in the separatist guerrilla groups. “I urgently called him and said that this does not bring us closer to peace. I beg you to influence the other side so that they stop killing our people,” Zelenskyy said.

Zelenskyy’s softer rhetoric bore fruit. A prisoner exchange of thirty-five persons on each side took place on September 7, after long talks and some behind-the-scenes work by French president Emmanuel Macron. Such prominent figures as Crimean film director Oleh Sentsov, who had spent five years in Russian captivity on terrorism charges, were among the Ukrainian citizens who returned to their homeland that day.

And it is not only the language that has changed. Armed forces withdrawal and attempts to restore the bridge that connects the two sides of the conflict have started in Stanytsya Luhanska. This bridge is vital for thousands of Ukrainian citizens, who cross it daily to access the territory controlled by the Ukrainian authorities to obtain their state welfare allowances, do shopping, or visit their relatives.

Even more important, the president and his representatives have openly agreed on the necessity of a Normandy format to relaunch the peace process. Minister of Foreign Affairs Vadym Prystaiko has offered to resolve the conflict in the Donbas within six months and to conduct local elections there simultaneously with the elections in other regions of the country.

On October 1, the Minsk talks led to an agreement to resume implementing the Minsk agreements according to the Steinmeier formula. Thus the noncontrolled Donbas territories may get special status, the local elections will be conducted in accord with Ukrainian legislation, the warring parties will retreat from the line of contact, and control over the Ukraine-Russia border will be given to the Ukrainian armed forces.

According to information provided by the Ukrainian General Staff, there are about 40,000 combatants controlled by the Russian military and ample sophisticated heavy arms sourced from the Russian Federation on the separatist side. So far Russia, which declines to formally recognize that it is a party to the conflict, has not announced any plans to disarm fighters or withdraw military machinery back to its own territory.

Zelenskyy and his administration are at very high risk. They have made a critical step in the peace talks, as demanded by Ukraine’s foreign partners. But Zelenskyy’s team is now the target of harsh criticism from the administration’s political opponents, who describe the conflict resolution proposal as treason and capitulation. However, voters’ trust in Zelenskyy remains high.

The new president is hesitating between two extremes-Russia’s demands (which cannot be fulfilled) and the peace process framework (which was set up by his predecessors and cannot be fulfilled either). He appears to be hesitating before taking the next step: either he is afraid to promote his agenda or he does not have enough resources to do so. The critical window of opportunity for facilitating the peace process is gradually closing. The slight opportunity to defrost negotiations can disappear quickly and be followed by years of a new freeze and further hostilities along the front line.