Why The Russia-Ukraine Gas Dispute Is Making Europe Worried

(RFE/RL – rferl.org – Charles Recknagel – May 7, 2014) The European Union gets about one-third of its natural gas from Russia, and about half of that gas arrives in Europe via pipelines passing through Ukraine. Moscow is threatening to cut off natural-gas deliveries to Ukraine unless Kyiv promptly pays its outstanding bills. And that means the EU could potentially be caught in the cross fire.

Here are five things to know about the situation.

Why Should The EU Worry?

One reason is empty natural-gas storage facilities in western Ukraine.

Summer is when Ukraine usually fills its giant storage facilities with Russian gas to provide for peak usage periods during the winter, when the real-time gas flow from Russia is not enough to meet local demand.

But there is no guarantee the tanks will be filled this summer as Kyiv and Moscow quarrel over gas prices. That is troubling because if Ukraine’s winter tanks are not full, there is a danger it might compensate for winter shortages by siphoning off Russian natural gas intended for Europe.

Gas experts say the storage tanks need to be filled with about 12 billion cubic meters by September. But as Ukraine seeks to buy that gas, Russia is threatening to cut off any new sales of gas to Ukraine unless it receives prepayment for June supplies by May 31.

Moscow puts Ukraine’s total gas debt at some $3.5 billion for gas already delivered, including a surprise doubling of Ukraine’s gas price in April. Kyiv calls the amount exorbitant and says it is ready to pay an “honest, market price” instead.

Is Moscow Sending A Message To Brussels?

Moscow seems to be using the natural gas crisis to send a message to Brussels that the current government in Kyiv is unreliable and that maintaining support for it will be burdensome.

Jonathan Stern, chairman of the Natural Gas Research Program at the Oxford Institute for Energy Studies, notes that, in the past, Moscow waged gas wars with Ukraine bilaterally, without directly involving Europe in negotiations. But this time is different.

“With the switch of the government in Kyiv,” Stern says, “the Russian position is, ‘Europe, this is your problem. You are now in contact with these guys. You are now approving what they are doing. You solve this problem. We are owed money. We want our money.'”

Because Kyiv has no money, Moscow expects the West to pay in its place. The International Monetary Fund (IMF) approved a $17 billion bailout fund for Ukraine this month, with $3.2 billion to become available immediately.

Whether that money will be used to help pay Ukraine’s gas bill is unclear.

Is The Gas Crisis Going To Escalate?

The showdown over Ukraine’s gas debts comes at a time when relations between Russia and the West are steadily deteriorating. The West has sanctioned close allies of Russian President Vladimir Putin, along with Ukrainian separatist leaders, and threatening the EU’s energy security would be one way Moscow might discourage Brussels from going further.

Stephan Meister, a Russia expert at the European Council on Foreign Relations in Berlin, says Moscow has shown a willingness to continually raise the stakes throughout the Ukraine crisis.

“If we observe the whole Ukraine crisis, we can understand that Russia is willing to go very far in escalating the conflict,” he says. “So I am sure they are also willing to escalate in terms of energy supply.”

But there are limits to how far Moscow can escalate a gas war that damages the EU without damaging Russia’s own commercial interests, as well.

“They still depend very much on the European market,” Meister notes. “They need a kind of solution [where] they don’t lose Europe as a customer. They still hope to export gas to Europe and to use the Ukrainian pipeline, so they have a certain interest in a compromise and there is still a certain kind of pragmatism.”

That could mean that any cutoff of Russian gas to Ukraine would be limited to a few weeks.

There is a precedent for that.

A two-week cutoff of gas to Ukraine in 2009 caused parts of the European Union — notably in the eastern states — to suffer shortages until Moscow and Kyiv reached a new agreement on prices.

Meanwhile, the EU is looking for ways it could help Ukraine survive a temporary gas cutoff from Russia.

How Vulnerable Is Europe?

Energy experts say Europe enjoyed a mild winter, so gas stockpiles within the EU are at a high level, creating a reserve for withstanding any temporary interruption of the supply of gas through Ukraine.

That puts the EU in a much stronger position than it was in 2009.

At the same time, EU officials are talking of developing alternate supplies to Russian gas, such as shale gas or importing more liquefied natural gas, including from the United States.

Still, Europe’s best defense against any gas war may be none of the above.

Stern notes that the EU states and Russia are bound together by contracts that give both sides powerful economic reasons not to radically change their current relationship.

That goes for the EU, he says, as much as for Russia.

“There has been a lot of talk in the last few weeks about how Europe could replace Russian gas,” Stern says. “And the answer is really it can’t, within a 10-year period. And what most people have neglected to understand is that should these contracts not continue, there will be hundreds of billions of euros to be paid in arbitration tribunals.”

The drama to watch is the ongoing negotiations between the top energy officials of Russia, Ukraine, and the EU.

The three sides held an emergency meeting May 2 in an effort to resolve Ukraine’s debt problem before Moscow’s threatened an end-of-the month cutoff.

The meeting, in Warsaw, failed to reach any agreements, with EU Energy Commissioner Guenther Oettinger saying, “It’s a concern for me to see that security of supply for end consumers is not guaranteed.”

The three sides will meet again in mid-May and at the end of the month. 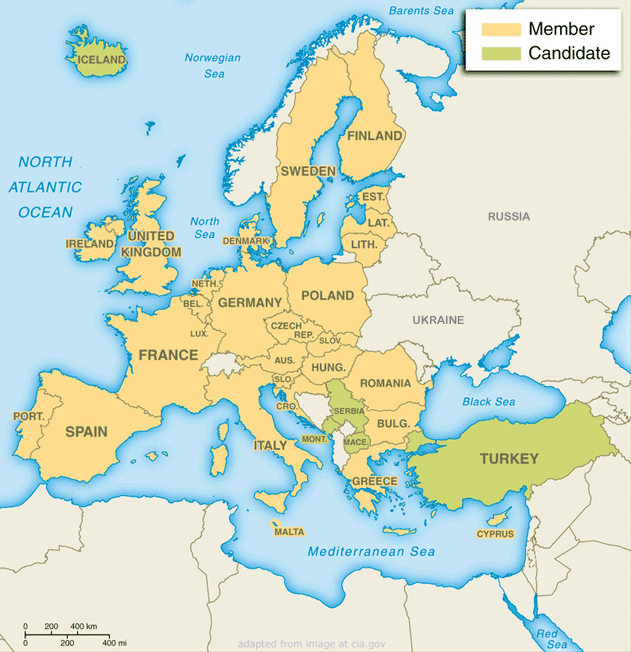