Thousands Protest In Moscow Against Plan To Raze Soviet-Era Housing 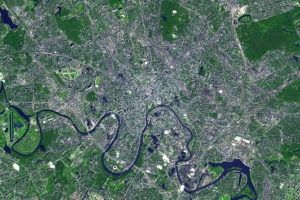 MOSCOW — Thousands of people have taken to the streets of Moscow to protest the proposed demolitions of Soviet-era housing blocks in the Russian capital.

The May 14 protest, held on a wide central Moscow street named after Soviet dissident Andrei Sakharov, marked a large showing of grassroots anger less than a year before a planned presidential election in which President Vladimir Putin is expected to secure a new six-year term.

Backed by Putin, Moscow Mayor Sergei Sobyanin plans to knock down 4,500 prefabricated buildings erected on an industrial scale across Russia in the 1950s-60s to ease a housing crisis.

Supporters argue that the 3.5 trillion-ruble ($62.1 billion) project is vital, as it will replace the aged buildings with high-rise housing in a city that faces rising rents and a housing crunch. But opponents say the program, due to start in September, is an assault on their property rights.

“People don’t quite understand the correlation between freedom and wages. But when you attack the last thing they have, they will of course protest,” Nina Braginskaya, a 66-year-old philology professor, told RFE/RL at the protest.

Braginskaya held a placard that read: “I won’t give away an inch of my home!” Other protesters held anti-Sobyanin signs, such as “I support the demolition — of Sobyanin,” “Hands off my property,” and “Moscow is not a separate kingdom. Sergei Sobyanin — respect federal laws.”

Sergei Velichkov, a 42-year-old IT worker, told RFE/RL that the proposed demolitions “could lead to armed confrontation.”

“I’m prepared to buy a rifle, and if they break down my door, I’ll shoot. I’m a completely peaceful person…. They’ve pushed me to this. I’m going to defend my home,” he said.

Organizers of the protest, which was not spearheaded by the political opposition, claimed from the stage that 60,000 people had participated. Moscow police, who are regularly accused of undercounting the size of antigovernment protests, put the figure at 8,000.

White Counter, an independent activist group that tracks turnout at demonstrations, estimated that there were 20,200 people present inside the designated demonstration area.

Moscow authorities gave permission for a demonstration of no more than 5,000 people.

Russian authorities in recent years have tightened restrictions on public protests, including with a law criminalizing participation in more than one unsanctioned protest in a 180-day period. Critics say these efforts are specifically aimed at clamping down on the political opposition, whose requests to stage demonstrations are frequently rejected by municipal authorities.

The May 14 protest in Moscow was a rare public showing of substantial grassroots outrage, though social issues — such as other housing-related matters and the rights of car drivers — have triggered occasional large demonstrations during Putin’s 17 years in power.

The event was organized by local activists who met one another through their opposition to Sobyanin’s demolition plan. They explicitly decided not to allow opposition politicians to speak at the demonstration so as to avoid politicizing the rally.

Opposition leader Aleksei Navalny arrived at the protest with his wife and son and attempted to reach the stage, but police intercepted them and led them away from the platform.

The protesters’ anger was mostly directed at Sobyanin, while there was little or no criticism of Putin, who approved the renovation program in February. Speakers on the stage at the protest repeatedly called for Sobyanin’s firing.

Dinara Yakusheva, a woman introduced as Sobyanin’s representative, was invited to speak on the stage after Moscow City Hall apparently asked the organizers for permission. As Yakusheva tried to speak, demonstrators booed, whistled, and shouted “shame!”

Andrei Dukhonin, a 46-year-old real estate agent who attended the rally, told RFE/RL that the protest “is very important, because if similar things do not take place in the future, the authorities will simply continue with their impudence and lawlessness.”

Sobyanin said in a May 14 tweet that city hall would take into account all “substantive announcements” made during the protest, “including those made by opponents of the program.”

The housing blocks were designed for rapid assembly, and some versions were considered to have a shelf life of only 25 years.

The outcry has elicited a reaction from Putin, who told ministers that “it goes without saying that this should be done in such a way and with such means and methods so as to not breach the rights of citizens.”

Amid mounting public pressure, Moscow authorities earlier this month decreed that apartment blocks listed for “renovation” will only be demolished if two-thirds of apartments in a building vote in favor. Activists, however, are worried about possible falsifications and that those who fail to vote will be considered to have voted “yes.”

The voting was scheduled to kick off on May 15 but was launched by city hall hours after the protest on May 14.

Legislation related to the plan passed its first reading in Russia’s lower house of parliament with almost unanimous support on April 20. Lawmakers have promised to push for changes in later readings. Parliament has postponed the second reading of the bill until July.

OVD-Info, a nongovernmental organization that tracks detentions and arrests at public demonstrations, reported that two people were detained during the protests, one of whom was later released.