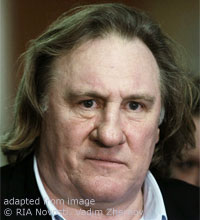 If you can right hook or roundhouse with the best of them, or rattle off 100 uses for a giant nose, then the door to Russia and the Kremlin may be wide open to you.

What is it with international martial arts, boxing and wrestling stars and Russia? A growing number of accomplished ‘heavies’ have been caught in the country’s tractor beam, with a wave of movie and music stars close behind them. Some even took Russian citizenship, earning the wrath of Ukraine in the process.

President Vladimir Putin personally just accelerated the issue of a Russian passport to legendary US boxer Roy Jones Jnr. “If you plan to link a large part of your life with activity in Russia, then of course we will be glad, and we will with pleasure grant your request regarding Russian citizenship,” Putin told Jones at a meeting in August (pictured below). Within days the boxer became a fellow countryman.

Putin will also have the deciding word in fast-track citizenship now sought by 44-year-old American mixed martial arts fighter Jeff Monson, nicknamed the Snowman. As well as a shared passion for physical training and combat (Putin is a judo black belt and has watched Monson fight from the ringside), the celeb’s body art may also help his case: His many tattoos include two in Russian saying svoboda (freedom) and solidarnost (solidarity), a Soviet hammer and sickle, and the latest addition done earlier this year in a Moscow salon – a tattoo running up his thigh depicting the giant “The Motherland Calls” monument in the Russian city of Volgograd, which commemorates the Soviet victory at the WWII Battle of Stalingrad. Plus the Minnesotan says he feels “Russian in spirit”.

Meanwhile, “Taxi” French movie star Samy Naceri is another who has said he wouldn’t mind a Russian passport.

Russia’s liberal tax regime is obviously one big draw. While the subject is not discussed much in public, it shimmers behind the compliments the big names heap on the country and Kremlin boss in equal measure.

French actor Gerard Depardieu received Russian citizenship in 2013 after fleeing France in protest at proposals for a 75% tax rate there. Although most Russians pay a flat tax rate of 13%, Depardieu reportedly pays a special 6% rate that applies to entrepreneurs with an annual income of less than €1.73mn. Other famous Western recipients of Russian citizenship would likely land the same bonus, since most will have business interests as well as a cabinet full of sporting or acting trophies.

“I am sick and tired of France’s tax system. I don’t live in France but I keep paying taxes. I think I’ll now make the decision to sell all my property in this country, including my house and restaurants,” Depardieu, 65, said in a recent interview with France’s TV Magazine weekly, adding that he felt “betrayed” in his native homeland.

Celebrity Russophiles also wisely tend to avoid the topic of politics and especially the Ukraine crisis, instead extolling the beauty of Russia’s landscapes, the warmth of its people and their strong sense of identity, and the generous welcome they get here.

Others like US heavyweight boxer Mike Tyson have been dropping in for years, in his case often as an honoured guest of controversial Chechen leader Ramzan Kadyrov, who is also a keen boxer and a lavish host (he gave Depardieu a large apartment in Grozny to entice him into spending more time there). And actor Mickey Rourke decided Moscow was just the place to reprise his own boxing past in 2014, wearing red trunks with a Russian flag to win his first match in 20 years at age 62. He has met Putin and wears a T-shirt with the president’s face on it.

Those who combine fighting skills and big screen success seem to fare best of all. Aikido master and action movie star Steven Seagal is another pal of Putin’s (and Kadyrov’s), occasionally appearing with the president at martial arts events, and popping up to exchange warm greetings at the recent Eastern Economic Forum in Vladivostok.

Not that he intends to apply for citizenship, he stresses, although he is of Jewish Russian ancestry. In March last year, as the world was reeling at Russia’s Crimea snatch, Seagal issued an urgent press statement to clarify his views on the Russian leader. “I have never said that President Putin was the ‘World’s Greatest Leader’, what I DID say was that President Putin was ONE of the World’s Great Leaders,” he emphasised.

“What brings them [Western stars] to kneel before Putin?” asks Artemy Troitsky, a Russian music and entertainment promoter, who helped bring such performers as David Bowie to Russia over the years and is now bemused by the glitzy procession of names arriving in Moscow. “Forget ideology – if there is ideology in Russia right now, it’s only severe anti-Americanism, which shouldn’t fit even boxers or Hollywood has-beens – it’s only money and corruption,” Troitsky, a staunch Putin critic, tells bne IntelliNews. “By corruption I mean all kinds of red carpet treatment on the state budget, from hookers, vodka, caviar galore, to gift apartments, and cars and glamour they’ve probably never seen. And by money I mean tax exile, [a] laundering haven, plus enormous fees for nothing.”

So what’s in it for Russia, apart from the evident kick the president gets while hanging out with the big boys of the dojo, boxing ring or film set? “For Russians – the most stupid of them – this is reassuring evidence of how great we are, but most don’t give a [hoot],” Troitsky concludes.

Maybe the Russia obsession is partly Chuck Norris’s fault. The 75-year-old US karate king and movie star was a regular visitor to Moscow in the 1990s, when he launched the now defunct “Beverly Hills” night club to plenty of media attention. (In January, Norris announced he would open a chain of burger restaurants in Russia by the end of 2015.) And Arnold Schwarzenegger must carry at least some of the blame: the 1988 movie “Red Heat” in which he plays a Soviet cop was a superlative action portrayal of blundering West meets rock-hard Wild East and learns a thing or two. And he brought Planet Hollywood to Moscow – even if it didn’t last much longer than Chuck’s joint.

Despite the Western sanctions over Ukraine and the current economic recession, Russia is still a pretty cool place to have free rein of, especially if you are friends with the president. And you aren’t stuck shivering in eternal winter either, despite the preconceptions. Putin’s meetings with Western stars, fighters or other often take place at his villa in the Black Sea resort of Sochi, complete with palm trees and jet skis. Hop across the water and you are in Crimea, which is now also courting big names to make a new home there among its stunning scenery and vineyards.

Crimea head Sergey Aksyonov in September invited celebrities from around the world to come to the peninsular and make their home – or one of their homes – there. “If honoured stars wish to settle in Crimea, they are absolutely welcome,” Izvestia newspaper quoted Aksyonov as saying. “We shall encourage the rise of a new Beverly Hills in Crimea.”

Showbiz stars, athletes, actors and such will face no administrative or other obstacles if they decide to buy real estate on the peninsular, move for permanent residence or come for a vacation, the official pledged. “We will happily provide assistance to scope out convenient places on the coast, either in the mountains, unique woods or plains – in any case in the midst of great nature and a marvellous climate.”

Aksyonov also reminded that Limp Bizkit frontman Fred Durst is another suitor for Russian citizenship. But he drew the line at a proposal from a member of the Russian parliament to put Depardieu in charge of Crimea’s wine production, saying: “I respect Gerard Depardieu as a professional actor, but unfortunately I don’t know anything about his winemaking experience.”

It’s just as well Crimea is open to Depardieu and Seagal, because the rest of Ukraine is now off bounds to both. In July, the unlikely pairing was added to the list of people who Kyiv regards as a “threat to national security”.

But if the warm welcome in Russia ever cools, other ex-Soviet republics are bound to reach out. In fact, “proud to be Russian” Depardieu has stated his intention to now live next door in Belarus after visiting President Alexander Lukashenko at his country home, declaring: “I currently live in Italy, but soon I’ll settle in Belarus, among peasants.”

Compared to the opulent reception he gets in Russia, far less frills would seem to go with that arrangement, if it materialises: According to Lukashenko’s press service, during the actor’s visit the president “showed him some models of Belarusian agricultural machines and even taught Depardieu some [grass] mowing skills”.