Russian winter: Why gray brings on the blues 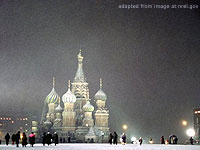 (Moscow News – themoscownews.com – Anna Arutunyan – October 10, 2013) It’s cold, it’s gray, and – given that it’s only October – it’s going to get worse. The weather this time of year is not just unpleasant – it can affect everything from the economy to how Russians feel about their lives, experts say.

After record-breaking rainfall in September and a cold spell in the first week of October that caused Moscow’s temperatures to plummet 4-5 degrees below the norm, hopes for an Indian summer have all but been wiped out. September, meanwhile, saw three times the average amount of precipitation – something that weather forecasters say hasn’t been recorded in 130 years.

The European part of Russia is famous for its long, cold winters, to say nothing of Siberia. In Moscow, temperatures that average below 5 degrees begin in October and end in late March or April, dipping to an average of -12 in January, according to Russia’s federal weather forecaster Gidrometcenter. And there are scientific factors that explain why Moscow in particular is not only colder, but gloomier than northern cities in North America and Europe.

The reason for that is that high-pressure fronts don’t always make it as far east as the European part of Russia.

“High-pressure cyclones from the Azores Archipelago [in the North Atlantic] are frequent guests in Western Europe,” Roman Vilfand, director of Gidrometcenter, told The Moscow News. “And what is high pressure? It prevents the formation of clouds. There’s a lot of sunshine.”

By contrast, Vilfand said, low-pressure fronts that predominate in Russia during the season lead to overcast, gray skies that last up until February.

“It’s more overcast and gray in Moscow than in Europe. But [October] isn’t even the grayest period,” Vilfand said.

That will come in November and December, for two reasons. “First, daylight is reduced to a minimum, 6.5 hours,” Vilfand said. But as a result of low-pressure cyclones, “there’s a total of only 30 hours of sunlight for the whole of December. Less than an hour a day.”

Nor is Moscow any warmer than northern cities like Stockholm, despite being at a slightly lower latitude.

“Northern European cities [like Stockholm and Copenhagen] are warmer than Moscow because there’s a warm current called the Gulf Steam,” Vilfand said. “This warm current considerably softens winter weather there.”

The heating season, when the city’s boilers start sending hot water through radiators in apartment buildings, began in the last week of September. On average, it is due to last until April. Almost all of Moscow’s housing has centralized heating.

The long heating season (about 7-8 months) is one reason why Russia consumes more energy per unit of GDP than any other top-ten energy-consuming countries, according to a report published by the U.S. Department of Energy in early 2012. “Vast domestic energy supply, cold climate and inefficient technologies have ensured that high energy intensity remains endemic to every sector of the economy,” the report said.

According to National Geographic magazine, Russia spends more to heat its homes than Canada. According to the International Energy Agency, Russia spent $39.3 billion in fossil fuel subsidies in 2010, a figure that some economists argue is too high.

Is the weather making us SAD?

Findings about a correlation between weather and mental health are inconclusive, but gray skies and long winters do have a noticeable effect on how people feel.

“The gloomy weather can be so persistent that it affects people on a subconscious level, I think,” Anna, an American expat studying psychology in Russia who only agreed to use her first name, told The Moscow News.  “In trying to adapt to it, they actually look for someone to blame – and a whole lot of them seem to blame the government.”

While no sociological surveys have been conducted to measure the effects of Russia’s winters on mood, those effects are still felt, according to Denis Volkov, of the Levada Center polling organization.

“People tend to answer various questions – about life, satisfaction – more pessimistically in March,” Volkov told The Moscow News, citing seasonal fatigue. “It’s not so much due to the weather itself as to having lived through winter, [which is] cold [with] little daylight.”

Moreover, evidence that has been emerging in the last two decades suggests that lack of sunlight leads to reduced production of natural anti-depressants like serotonin in the human brain. That, in turn, can lead to seasonal affective disorder (SAD), also known as the winter blues, psychologists say.

For treating SAD during the long winter ahead, some psychologists recommend light therapy using special lamps that simulate daylight.

“There is evidence that lack of light can induce SAD regardless of the season,” said Konstantin Blokhin, a psychologist with the Vremya Radosti center, which offers therapy to treat depression. “Of course, you can’t treat clinical depression with light alone, but it helps as an additional therapy.”

According to psychologist Arman Bekenov, the effects of weather on a person’s mental state are more complex, with the climate acting as an emotional background.

“In psychology, there is such a thing as resource,” Bekenov said, explaining that a resource is an external factor that makes a person feel better and helps him or her deal with difficulties in life. “When it’s sunny, when it’s beautiful outside, this gives us resources. When it’s cold, when it’s dirty outside – and a lot of our weather patterns result in dirt outside – our environment doesn’t give us resources [to cope].”