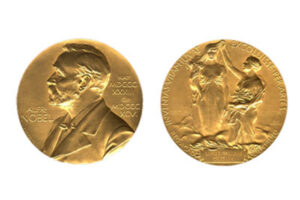 The editor of the independent Novaya Gazeta newspaper won the prestigious award with journalist Maria Ressa from the Philippines.

The editor-in-chief of one of Russia’s leading independent newspapers, Novaya Gazeta, has won the Nobel Peace Prize.

The awards committee, based in Oslo, Norway, handed the prestigious prize to Dmitry Muratov, 59, for the paper’s reporting on human rights, freedom of speech and other politically sensitive topics.

“Muratov has for decades defended freedom of speech in Russia under increasingly challenging conditions,” Berit Reiss-Andersen, chair of the Norwegian Nobel Committee said during the presentation on Friday.

Muratov said the prize was completely unexpected, and that he initially thought the incoming phone call, from a Norwegian number, was spam.

He said the prize is a recognition of the increasing pressure being placed on journalists inside Russia.

“Russian journalism is being suppressed right now. We will try to help people who are now recognized as ‘foreign agents’ and who are being attacked and expelled from the country,” he told the Podyom news site.

Kremlin spokesman Dmitry Peskov congratulated Muratov as “courageous” and “talented,” following the announcement of the award.

“He is committed to his ideals. We congratulate him,” Peskov added.

Russia has launched a sweeping crackdown on independent media outlets over the last year, branding many “foreign agents” — a label critics say is designed to hamstring the ability of critical publications to continue operating.

Novaya Gazeta has not been named a “foreign agent,” unlike other leading critical outlets such as the TV Dozhd broadcaster, Meduza news site and investigative outlets iStories and The Insider.

‘For those who died’

The paper has been Russia’s leading investigative newspaper for decades and is known for breaking stories on the downing of flight MH17 and human rights abuses in the southern republic of Chechnya, including gay purges.

Muratov said the award was the achievement of the whole Novaya Gazeta team, including the six journalists who have been killed since the paper launched in 1993.

“I can’t take credit for this. This is Novaya Gazeta’s. It is for those who died defending the right of people to freedom of speech,” Muratov was cited as saying by Russian news agency TASS.

“It is for Igor Domnikov, Yura Shchekochikhin, Anna Politkovskaya, Nastya Baburova, Natasha Estemirova, and Stas Markelov,” he said, naming the slain Novaya Gazeta reporters. “This is for them.”

The murders are believed to be linked to the reporters’ investigative work, particularly in Chechnya in the cases of Politkovskaya and Estemirova.

Politkovskaya, a fierce critic of Putin and the Kremlin’s wars in Chechnya, was shot dead on Oct. 7, 2006, Russian President Vladimir Putin’s 54th birthday, in the entrance hall of her apartment block in central Moscow. She was 48 years old.

A 15-year statute of limitations to charge those who ordered the killing passed on Thursday, and human rights activists in Russia and around the world have slammed Russian authorities for not properly investigating the murder.

“I hope this prize will help us to protect ourselves against attacks from the authorities. This award is important not just for us, but the whole of the Russian journalism community,” said Pavel Kanygin, a veteran reporter at Novaya Gazeta.

Muratov won the award alongside journalist Maria Ressa of the Philippines.

The Nobel Committee heralded the pair’s “courageous fight for freedom of expression in the Philippines and in Russia,” and said the award was intended to “underscore the importance of protecting and defending these fundamental rights” of freedom of expression and freedom of information. The award ceremony will be held in December in Oslo.

Muratov helped found Novaya Gazeta in 1993, and was editor between 1995 and 2017, when he became the paper’s editor-in-chief. The outlet is one of the only independent print publications still in circulation in Russia, following what critics have called the Kremlin’s decades-long crackdown against freedom of expression inside the country.

Muratov said he will give part of the $1.1 million prize to a charity which helps children battling rare diseases.

Muratov becomes the first Russian to be awarded the Nobel Peace prize since the fall of the Soviet Union. Mikhail Gorachev, the last president of the U.S.S.R., won the award in 1990, as did physicist, human rights campaigner and dissident Andrei Sakharov in 1975.