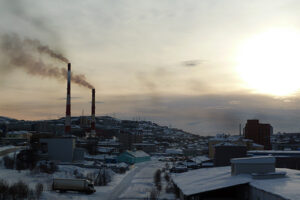 Russia is cutting its greenhouse gas emissions faster than the G7 group of nations, President Vladimir Putin said in his video address to the G20 summit in Rome on Sunday.

Russia is heating 2.5 times faster than the rest of the planet and its Arctic regions are warming especially fast, Putin told the meeting of the world’s 20 leading economies. In the past decade alone, the average annual temperature in Russia has risen by about 0.5 degrees Celsius — and as the climate crisis intensifies, Russia is facing multiple threats including desertification, soil erosion and permafrost melt, he said.

“Naturally, our country is taking an active and decisive part in international efforts to preserve the climate,” Putin said.

“Russia is one of the leaders in the global decarbonization process, according to international experts. Over the past 20 years, our economy’s carbon intensity has declined by an average of 2.7% annually, and this is more than in the world as a whole, and even more than in G7 countries,” he continued.

However, international climate experts have painted a different picture of Russia’s decarbonization efforts.

According to Putin, Russia is fully complying with the 2015 Paris Climate Agreement and is making progress on cutting greenhouse gas emissions, modernizing its grid and promoting greater energy efficiency.

Yet Russia’s carbon emissions have been rising in recent decades and are projected to do so for multiple years. The country has been criticized for not pursuing more ambitious reductions than 70% of emissions in the baseline year of 1990, when the Soviet collapse halted nearly all heavy industry.

Russia also remains one of the few heavily polluting countries which has yet to present an updated ambitious strategy to fight climate change, as was required ahead of this week’s COP26 summit.

“Today, the share of energy from practically carbon-free sources … exceeds 40%. Together with natural gas — the least carbon-intensive fuel among hydrocarbons — this share amounts to 86%. This is one of the best results in the world,” the Russian president said.

And although clean energy accounts for 40% of Russia’s power generation, about half of that amount comes from nuclear and just under 0.5% comes from solar and wind.

The Russian economy will be much more energy-efficient by 2035 and Russia is aiming to reach net-zero carbon emissions by 2060, Putin said. By effectively managing its vast natural carbon sinks (forests, marshes and sea surface), Russia can absorb massive amounts of greenhouse gases, he claimed.

Experts have previously told The Moscow Times that Russia’s carbon sink strategy is unproven and unrealistic.

Putin joins Chinese President Xi Jinping and Brazilian President Jair Bolsonaro as the only G20 leaders to not attend the G20 summit in Rome or the COP26 conference in Glasgow in person, citing coronavirus concerns.

U.S. President Joe Biden on Sunday expressed his disappointment that Russia and China “basically didn’t show up in terms of any commitments to deal with climate change” at the G20 summit.