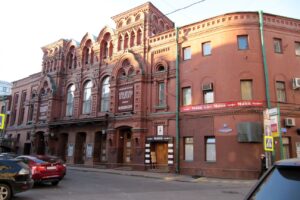 A year of bold new plays and bold new performances of old favorites.

Moscow’s theaters have taken a hit over the past two years in the wake of changing Covid-19 restrictions, but the main theaters have survived, and a ‘new normal’ is being established. It seems only fitting in the Chinese year of the tiger— the symbol of fearlessness — that the 2022 programs for Moscow’s central theaters are bravely bolstering a plethora of both new productions and beloved classics in what seems like a sense of optimism for open doors and a thriving cultural scene in the coming year. In the months ahead Moscow’s theaters will be showcasing the very best that Russian and international theater has to offer.

In October 2022, the Mayakovsky Theater will celebrate its 100th anniversary, so an eclectic roster of world-class performances is expected to be announced in the coming months. Their first premiere this year will be Alexander Ostrovsky’s celebrated play, “Enough for Every Wise Man,” directed by Anatoly Shulyev (Jan. 21 and 22). Though over a century and a half has passed since the play’s creation (1868), it is as hilarious as ever in its satirical wit, following the narrative of a penniless young man named Glumov, who pursues a more decadent lifestyle. Actors include Tatiana Augshkap, Nadezhda Butyrtseva and Vladimir Guskov.

Artistic director Mindaugas Karbauskis’ 10th production at Mayakovsky (and marking his 10th year in this role) is an adaptation by Dmitry Bykov of Jean-Baptiste Moliere’s “School of Wives.” The 2022 premiere of the play will be Jan. 8 and is celebrated for its hilarity mixed with equal amounts of tragedy. The central role of Arnolf, which Moliere first performed himself, will be played by People’s Artist of Russia, Anatoly Lobotsky. “School of Wives” has already been nominated for Golden Mask and State Prize of Russia awards. Tickets and information here.

If you’re fancying something quintessentially British and in the English language to remind you of Christmases in the UK, or if you are a fan of Dickens, Moscow English Theater is performing “A Christmas Carol” on the small stage of the Russian Academic Youth Theater (RAMT) with tickets still available for Jan. 9. You can expect kissing under the mistletoe and a multitude of snowballs being thrown at Scrooge. Also not to be missed is Egor Peregudov’s modern-day take on Romeo and Juliet, with performances on Jan. 21, Feb. and March 18, as well as Griboyedov’s “Woe from Wit” adaptation, directed by Alexei Borodin and featuring actor Kerin Maxim as Chatsky. “Woe from Wit” will be performed on Jan. 13, Feb. 23 and March 30. Information and tickets for RAMT here.

In a move much welcomed by many theater lovers, esteemed actor Konstantin Khabensky has taken the coveted role of director at Moscow Art Theater. It is hoped that Khabensky will revive the sense of innovation that Tabokov’s theater once fostered. Although Khabensky’s lack of theater directing experience has been attacked by some critics, it seems that there is an impressive roster of productions on the cards for 2022. Khabensky has brought back some productions removed from the repertoire, including box office best sellers “The Ideal Husband” and an adapted tale of “The Karamazovs.” “The Karamazovs” will be performed on Jan 29, with “The Ideal Husband” taking place on Jan. 14 and 17 — both will be directed by Bogomolov. Actors Andrei Burkovsky, Igor Zolotovitsky and Daria Moroz have also rejoined the troupe at Moscow Art Theater, which is being hailed a ‘victorious’ triumph for Khabensky. Burkovsky and Moroz will both perform in “The Ideal Husband,”with Moroz also taking on the role of Katya the Bloodsucker in “The Karamazovs.” Information and tickets here.

You may have heard in the news of Sovremennik’s unconventional idea to train stage actors (the ones who rarely perform) in administrative duties within the theater. Happily we can say that their 2022 program is somewhat less contentious. To kick off the new year, they will be continuing their more than 55-year tradition of premiering a New Year stage performance for children’s theater with a stunning production of “The Wizard of Oz” directed by Polina Rashkina. This classic tale will be performed from Jan. 3. Though Moscow Art Theater has Khabensky as their new director, his stage acting career is still in full swing, with his hotly anticipated fantasy play, “Don’t Leave Your Planet” being performed on Jan. 17 and 18. “Don’t Leave Your Planet” is a production created by Khabensky (who plays every character in the play) and conductor Yury Bashmet, accompanied on stage by the Moscow Soloists Chamber Ensemble. The play is based on the story of “The Little Prince,” but director Victor Kramer takes an unconventional angle on the well-known tale that avoids the staple image of the boy with golden hair. Information and tickets here.

A true celebration of life, new beginnings and fittingly part of Meyerhold’s New Year program will be a performance directed by Andrey Stadnikov — “The Celebration” premiering on Jan. 31, with a second performance on Feb. 12. The play focuses on humankind’s relationship with the natural world and is interwoven with vibrant dance and musical performances. In the summer, Meyerhold will be hosting the premiere performance of Moscow Ballet’s brand new “Pavilion” (still in its conceptual stage) in a co-production with Norwegian choreographer Jo Stromgren who is best known in Moscow for his celebrated production of “Estrogen,” staged in 2014 at Moscow Pushkin Theater. Tickets are not yet on sale, but performances are scheduled for July 15, 16 and 17. Information and tickets here.