Russia Rises To Second In Global Arms Sales, With U.S. Still At No. 1 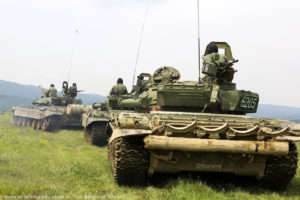 The United States remains the global leader in arms sales, while Russia has surpassed Britain to take the No. 2 spot as it attempts to modernize its military, a leading research group says.

The Stockholm International Peace Research Institute (SIPRI) said on December 10 in its annual report that the combined sales of arms and military services by U.S. companies rose 2 percent in 2017 to $222.6 billion.

Russia became the second-largest arms producer, it said, with $37.7 billion, up 8.5 percent from a year earlier.

The group based its calculations on the combined sales of arms-related enterprises ranked among the Top 100 producers worldwide. The United States had 42 of the Top 100 companies, while Russia had 10, it said.

“This is in line with Russia’s increased spending on arms procurement to modernize its armed forces,” he added.

The report said that, for the first time, a Russian company, state-owned Almaz-Antey, appeared in the Top 10 in the ranking for global arms sales.

Britain remained Western Europe’s largest arms seller, with a total of $35.7 billion, and it had seven companies listed in the Top 100.

Overall, the report said, sales of the Top 100 firms totaled $398.2 billion in 2017, a 2.5 percent increase over 2016. Sales of Chinese firms were not included, it noted, saying the information was not reliable.

SIPRI, established in 1966, describes itself as an independent international institute dedicated to research into conflict, armaments, arms control, and disarmament.