Russians constitute only two or three percent of the population of the Central Asian country of Turkmenistan, their departure having been accelerated by the economic crisis there and the Islamist threat from Afghanistan and Ashgabat’s closure of Russian-language schools and insistence that officials speak Turkmen.

In an article on the Russian Information Agency today, journalist Igor Gashkov says that only one Russian-language school is left in the entire republic and Russian is heard on the streets only in the capital city. As a result, he says, Turkmenistan now constitutes “the ruins of empire in the sands of Central Asia” (ria.ru/world/20180422/1519094484.html). 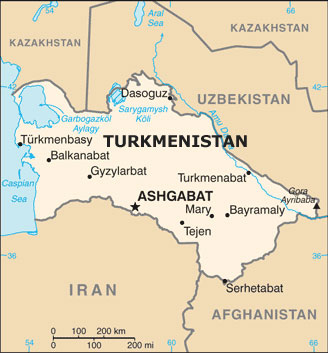 The few remaining Russians, the journalist says, speak to outsiders only on condition of anonymity. One of them says that ever more Russians are leaving and that those who remain “simply do not have any opportunity” to do so. “Turkmenistan,” he continues, “is becoming part of the Muslim world forgetting both the Russian and Soviet past.”

In that country, “already an entire generation has grown up which does not speak Russian,” the ethnic Russian says. And in the markets, one can no longer buy and sell unless one knows Turkmen.

According to the RIA journalist, “Turkmenistan has been converted into the most closed state of the post-Soviet space. Its citizens did not take part in the mass labor migration from Central Asia to Russia in the 2000s and 2010s.” And what its people know about Russia comes mostly from crime shows on television

“In Turkmenistan,” another Russian says, “people really low Russian criminal series. And looking at them, they begin to think that we have a very difficult situation with crimes and fires.”

This shift from a Russian world to a Muslim one has not made the government in Turkmenistan more popular, however, according to Gashkov. The collapse in gas prices forced the regime to cut popular subsidies and the threat from ISIS in Afghanistan is something many Turkmens are worried about.

There are rumors that ISIS units have already crossed into Turkmenistan, but people are uncertain because of the tight control the authorities exercise over the media, the Russian journalist continues. But one ethnic Russian there did tell him that there is good evidence that Islamist radicals are already fighting inside Turkmenistan.

“Soldiers are being brought home in zinc caskets,” he says. And “in prisons and camps, the inmates say that if the Islamists come and open the gates of the colonies, then a large part of the convicts will go over to them” and fight against the government.