Many Russian commentators have suggested that the findings of the Mueller investigation may be good news for Donald Trump but will do little to affect US-Russian relations. But Vladimir Frolov, who is well-connected with the regime, says that Mueller’s findings open the way for Vladimir Putin to visit the US before the end of 2019.

Because the investigation ended the threat of Trump’s impeachment, a visit by the Kremlin leader to Washington “before the end of this year is completely possible,” he says (republic.ru/posts/93376?utm_source=republic.ru&utm_medium=email&utm_campaign=morning). 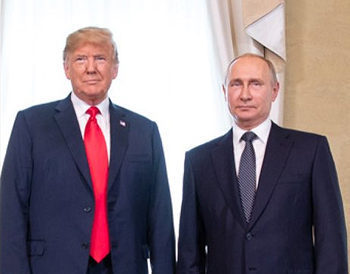 Other investigations into Trump’s activities may go forward in the House of Representatives but “politically they will have ever less effect,” Frolov argues. “Trump will continue to accuse of the Democrats of “‘a witch hunt’ and ‘harassment of the president'” and those arguments will in fact work to his benefit.

If such a visit occurs or in order to make it more likely, Moscow could perhaps make “a gift” to the new Ukrainian president by releasing the Ukrainian sailors, the Moscow commentator says.

But his further comments are even more interesting and important: Frolov says that “of course, there couldn’t have been collusion between the Russian intelligence service and Trump and his closest entourage. Those working in the Russian agencies aren’t fools and understand the risk of that kind of influence operation.”

“Cyber spying and active measures involving the publication of compromising information are one thing; an operational deal with the immediate entourage of a candidate for US president are quite another. Of course, any intelligence service will seek and establish ties with the command of a future president … but influencing the results of elections is not their business.”

According to Frolov, “Russian cyber-interference was done deliberately and in direct pursuit of the goal of harming Clinton. To a certain extent, it recalled the KGB operations intended to ‘harm Ronald Reagan’ and not allow his election as US president. Simply in 016, the social networks gave new possibilities for this.”

“Was the game worth the candle?” Frolov asks rhetorically. “In the short term, no: Russian-American relations only got worse. Trump was tied hand and foot, sanctions against Russia intensified and haven’t been weakened it.” And Russian interference in the US elections has been shown, even if there was no “collusion with Trump.”

“But in the longer-term perspective,” he suggests, “everything worked out” as Moscow hoped. “Trump, not without our help, became president; and Clinton didn’t. And today, after bein cleared by the investigation, Donald Trump, as Vladimir Putin does not tire of reminding him, can finally fulfill his most important campaign promise – improve ties with Russia.”

A summit meeting in Washington would be a great place for that to start.