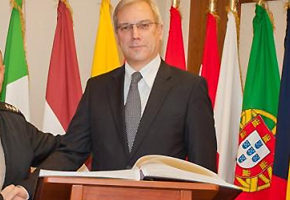 BRUSSELS. Nov 10 (Interfax) – The proposals discussed by the NATO defense ministers at the conference in Brussels on November 8-9 in regard to the adaptation of the alliance’s command structure came as no surprise to anyone, the Russian Permanent Representative to NATO, Alexander Grushko, said.

“They were made in furtherance of the Warsaw summit’s decisions, which included a review of the alliance’s command structure to determine new demands as far as adapting to changed security circumstances,” Grushko told Russian reporters on Thursday after the ministerial conference.

“Although the measures to adapt NATO’s military potential are being explained with reference to the need to deter threats coming from every direction, I cannot help but say that all of those efforts are focused on the standoff with Russia,” he said.

It is no secret that NATO has been eyeing the possible establishment of two additional commands, Grushko said.

NATO said after the ministerial conference that its new defense configuration would rest upon three elements, namely the commands in the Northern Atlantic and Europe, as well as “the integration of a cyber component, a component of cyber defense into the entire NATO command structure and operational activity,” Grushko said, adding that this decision was not new, either.

“About two years ago, NATO said that cyber space was also becoming an operational field for the alliance, in addition to airspace, the sea, and the land, and that the Warsaw Treaty, including Article 5 [on collective defense], will equally apply to it,” he said.

“As for the military implications of these steps, we should definitely wait for the final formalization of these decisions at the next meeting of the defense ministers in February 2018. But it is already clear that NATO was inspired by Cold War techniques in elaborating these decisions and the consideration of ways to heighten the alliance’s military presence, particularly on the eastern flank,” Grushko said.

The prospective command in the Northern Atlantic “is a replica of the command, which existed before 2002 and oversaw the deployment of U.S. forces from its national territory to Europe, the protection and defense of relevant marine communication lines, anti-submarine warfare, and the entire range of issues pertaining to the speed and safety of such operations,” he said.

“As to the other command, which will be overseeing the relocation of forces and hardware in Europe, NATO has discussed the subject multiple times and from various angles. A lot has been said about the need to form a so-called ‘military Schengen’ for the alliance, which implies special legal and logistic regulations to enable the free movement of troops, weapons, hardware, and means of technical support and ensure the rapid deployment of NATO troops in every sector,” Grushko said.

[featured image is file photo, adapted from image at eucom.mil]