In With The Old, In With (A Few Of) The New: Russia’s Government Reshuffle

The quip by a writer for the Russian newspaper Moskovsky komsomolets was an acerbic suggestion that Putin’s government shake-up was a radical house-cleaning. 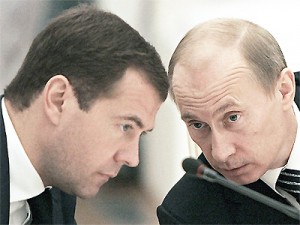 In fact, though, the cabinet changes Putin has made as part of an effort that also includes constitutional amendments altering Russia’s power structure are not that radical. Not everyone is leaving: Far from it.

Here are five takeaways from the government personnel changes put in place on January 21, five days after parliament rubber-stamped the appointment of Mikhail Mishustin to replace Medvedev as prime minister.

Putin cast the new cabinet as a “major renewal” but also called it “very balanced,” saying that it included “enough people who worked in the previous government.”

Shoigu, who is more popular than most Russian officials and is said to be loyal to Putin, is seen as a possible successor. Now 64, he has been defense chief since Putin’s return to the Kremlin for a third term in 2012 but has been in government since 1991, the year the Soviet Union collapsed, serving as emergency situations minister for 11 years.

Lavrov, 69, has been the top diplomat since 2004, dutifully conveying Russia’s positions in the face of growing criticism from the West over what U.S. officials call Moscow’s “malign activities” abroad. He is said to have been seeking to leave his post for years.

The government reshuffle comes just as Putin is starting to engineer a realignment of the power structure that could be aimed at enabling him to keep a leading role after 2024, when he is constitutionally barred from seeking reelection. The fact that he left Lavrov and other key ministers in place may suggest that he wanted to shake things up but was wary of going much beyond cosmetic changes.

Speaking of cosmetic changes, analysts say that at least four people who lost their jobs were removed because they created image problems.

Those four were Culture Minister Vladimir Medinsky, Education Minister Olga Vasilyeva, Sports Minister Pavel Kolobkov, and Vitaly Mutko, a deputy prime minister who was sports minister at the height of the doping scandal that erupted after the 2014 Sochi Olympics and continues to have severe repercussions for Russia’s global reputation.

Medinsky and Vasilyeva have attracted sometimes unwelcome attention with remarks that may have pleased social conservatives, but caused concern among others and deepened doubts in the West about Russia’s direction.

Some ministers “were obviously removed for ineffectiveness and major defeats,” Andrei Kolesnikov, a senior fellow at the Carnegie Moscow Center, wrote in an article for news outlet RBK naming Mutko and Kolobkov. “Russian sport has never seen a disgrace [as big as] the doping scandal.”

Abbas Gallyamov, a former government speechwriter, called Medinsky, Vasilyeva, and Mutko “allergens” and suggested that their departures indicated that Putin is warier about public opinion than in the past.

“The Kremlin used to say, sort of: ‘We’ll appoint whomever we want, and the opinion of those who don’t like something about it does not worry us,'” Gallyamov wrote on Facebook. “Now the logic has changed. The authorities do not want to irritate society.”

Media reports said Medinsky would become an adviser to Putin — a role that could allow him to remain in the fold while limiting his public profile.

Mishustin, the little-known tax-service chief who replaced Medvedev as prime minister, has been described by many as a technocrat. The idea is that Putin, who told the new government that the “most important task is to increase the welfare of our citizens” — and whose own political future will depend partly on whether that happens — wants someone who can get the job done.

But one official who did not keep his post is Maksim Oreshkin, the 37-year-old now-former economy minister who is also seen as a technocrat — “practically the first technocrat of the new type,” as Kolesnikov put it — and, at least earlier in his three-year stint as minister, had been described as a potential future president.

Oreshkin was seen as a careful spender, on the thrifty side of a long-standing debate within the Russian ruling elite. By contrast, a big winner in the reshuffle is Andrei Belousov, an adviser to Putin since 2013 who was described by The Wall Street Journal as “a proponent of increased government spending and a greater government role in the economy.”

Belousov, 60, was named first deputy prime minister — the No. 2 post in a cabinet that also has eight plain old deputies. His appointment may signal that Putin wants a close ally in that spot. It also suggests that he wants to spare little or no expense in a bid to implement the large-scale National Projects designed to boost the economy and to convince Russians that their own prospects are improving as he prepares for a transition in 2024 — or earlier.

In the end, though, there’s a limit to the fortune-telling that can be done based on the names and faces, new and old, in the reshuffled Russian government.

It’s part of a shift that Putin abruptly set in motion in his state-of-the-nation speech on January 15, when he announced plans to alter the balance of power between president, parliament, and prime minister and also boost the role of the State Council — one of the vehicles he could potentially use to maintain power when he is no longer president.

The process is moving fast, with a popular vote of some kind on the constitutional changes reportedly being planned for April. Meanwhile, one common view of Putin’s motives at the moment is that he wants to keep people guessing, inside and outside Russia.

Olya Oliker, Europe and Central Asia director at the International Crisis Group, tweeted as the cabinet’s makeup was being revealed on January 21 that an article she wrote earlier in the day was already out of date as “things kept happening.”

“But my bottom line, that this is just the framework, and we’ll need to wait to see what it all means, still holds,” she wrote.