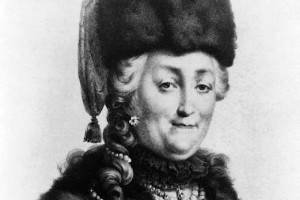 Jolie’s production company, Jolie Pas, has bought the option to adapt the book for film or a television drama, the agency, Georgina Capel Associates, said in an online statement.

“Catherine the Great and Potemkin: The Imperial Love Affair,” was published in 2000 under the original title “Prince of Princes: The Life of Potemkin” and focuses on the intense and extravagant relationship between the self-possessed Russian monarch and her militant lover. Montefiore’s first history book, it draws on the fascinating and passionate correspondence between the two lovers.

“Catherine and Potemkin had history’s greatest love affair. They were both brilliant people who were totally equal and totally balanced,” Montefiore was quoted as saying by British newspaper the Daily Mail.

“Catherine is the ultimate feminist hero. I feel very safe with Angelina in charge of it,” he was cited as saying by the Daily Mail.

“The characters are dear to my heart and I can’t imagine my book could be in better, more sensitive hands. This is a dream team to bring Catherine and Potemkin, these exceptional and flamboyant characters, to the screen,” he wrote in a statement published on the Georgina Capel Associates website.

Catherine the Great, a Prussian princess who married into the Russian royal family, deposed her husband and ruled the empire from 1762 to 1796 during what is often referred to as the Golden Age. Her love affair with Potemkin lasted for years and many believe the couple were secretly married.

Details regarding Jolie’s role in the production are yet to be revealed, the Daily Mail reported. The actress, whose name was previously linked to the role of Catherine in another adaptation of a novel about the empress that was ultimately never made, has been experimenting with off-the-stage roles. After making her directorial debut in 2011 with “In the Land of Blood and Honey,” Jolie returned behind the camera for “Unbroken” (2014). She was also a producer on both films.