A dangerous profession: Lack of justice for journalists may stem from a code of loyalty 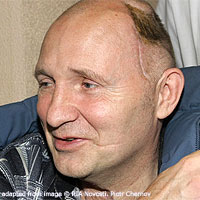 When a journalist dies in Russia, people may pay attention, but the crime usually goes unsolved. According to some observers, this may not change for a long time.

When Mikhail Beketov, a journalist who was brutally attacked in 2008, died in a hospital last week, Oleg Kashin, a journalist who survived a similar attack, marveled at just how few people showed up at his funeral ­ and how now, there was even less likelihood that his attackers would be brought to justice.

With his death, Beketov joined the ranks of dozens of other journalists whose attacks have not been solved in years. For Kashin and for other survivors, the central question isn’t so much why journalists are getting attacked, but why the investigations are not bringing results.

“Unfortunately, the passage of a victim is one of the best ways to forget about the case,” Kashin said in a recent interview with The Moscow News.

Beketov, a 55-year-old awardwinning journalist, was left permanently disabled from the beating motivated by his reporting work.

Despite a four-year ongoing investigation during which both President Vladimir Putin and Prime Minister Dmitry Medvedev promised that the case would be solved, Beketov’s attackers have never been officially identified.

Many have blamed a culture of violence as the culprit for physical hostility toward members of the media.

Yet the high rate of impunity with regard to journalist attack cases ­ the majority of which are never solved (those that go to trial demonstrate an abnormally high rate of acquittal) ­ draws attention to a different aspect of violence against the media. According to Kashin, attacks on journalists ­ and the failure of the government to adequately investigate and prosecute them ­ are part of a complex structure of loyalty, honor and the balance of power.

A critic of the mayor

The late Beketov was the editor of Khimkinskaya Pravda, a local newspaper he founded in 2006 and funded with his own money. He was critical of the city administration ­ particularly the then-mayor, Vladimir Strelchenko ­ and frequently reported on corruption and controversial local issues.

After he started to criticize government-supported construction plans for an $8 billion highway to St. Petersburg through the Khimki forest, Beketov began to receive threats demanding that he discontinue his coverage.

Beketov refused. His car was set on fire, and then his dog was beaten to death and left on his front doorstep. On November 13, 2008, Beketov was beaten outside his home by unknown assailants. He spent several weeks in a coma and lost his right leg, four fingers, and the ability to speak.

Kashin’s case is similar. Working as a daily correspondent for Kommersant, a Russian newspaper, he was severely beaten in 2010 after also writing critically about the construction of the Khimki forest highway, as well as investigating links between Nashi, a pro-Kremlin youth movement, and football hooligans.

Though Beketov and Kashin survived their attacks, numerous other targeted journalists did not. A number of high-profile media workers have been murdered for their work over the last 20 years: among them Paul Klebnikov, Russian Forbes Magazine’s Chief Editor, in 2004, and Novaya Gazeta reporter Anna Politkovskaya in 2006. None of these cases have ever been solved.

Though all were attacked as a direct result of their reporting, Kashin believes none were targeted because they were after the truth. “All the allegations of corruption or murder, they don’t bother society at all, they don’t harm anyone’s reputation,” he said.

Kashin believes that the common denominator in his own case, Beketov’s case, and the case of Politkovskaya, who reported on human rights abuses in Chechnya, is the fact that their articles were deemed by powerful groups to be offensive. Violence against journalists, then, is mainly motivated by a criminal interpretation of honor.

“According to ‘patsanskaya ethics [street law],’ what is scarier than exposing a truth is an insult,” Kashin said. “If you have been insulted, you have to take revenge, or you are not a real man.”

The unwillingness of the Russian government to pursue and punish journalist attackers, Kashin said, has to do with an “us vs. them” mentality espoused by officials.

“In the last ten years the government has treated journalists as enemies, and one does not help enemies,” he said.

Meanwhile, demand for loyalty by officials means that the police are often loath to investigate such cases to begin with.

Even when cases are prosecuted, chances are that the conviction doesn’t stick. Six defendants were tried for the murder of journalist Dmitry Khodolov beginning in 2000. All were acquitted twice: first in 2002, then 2004, despite protests from the Prosecutor General’s Office.

Partial Justice, a 2009 report by the International Federation of Journalists found that between 1998 and 2009, 50% of murder trials where the journalist’s work was the direct motive resulted in acquittals. In contrast, acquittals made up just 3% of trials where work was not a motive.

Confusion about the role of the media in present-day life may also be a major factor in the exceptional tolerance for violence against the Russian press.

“In the USSR, official media outlets were loudspeakers for the state,” said Daniil, a former Moscow media manager who asked that his last name not be identified. “It was a flawed system, but it suited many people. When the USSR fell apart, the media was ostensibly free…but now that there was no censorship, journalists were seen as actually dangerous all of a sudden.”

Putin acknowledged the country’s dangerous press environment last year, when he was asked about journalist safety during his December question-and-answer session with the press. “When people choose certain professions…that involve some degree of responsibility and danger, they basically understand what they are getting into,” he said.

“Unfortunately, your profession is among them, and this is not just the case in our nation, but in many other nations around the world,” Putin told journalists. “Is there anything that can be done to improve protection? The government has to do it.”

In spite of Putin’s words, Beketov’s still-unsolved case has served as a harsh reminder that today, Russian journalists are being attacked with impunity.