Obituary: Who Was Doku Umarov? 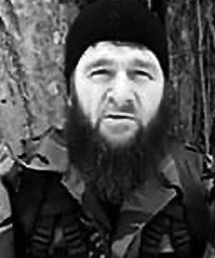 The April 8 announcement stops short of a full confirmation of Umarov’s death, but it comes one month after a website close to Russian Islamist militants, Kavkaz Center, said Umarov had “become a martyr.”

Considered the leader of the Islamist insurgency in the North Caucasus, Doku Umarov was one of the most-wanted fugitives in Russia.

After the start of the first post-Soviet Chechen war in 1994, Umarov rose up the Chechen rebel hierarchy to become the leader of the Caucasus Emirate group that has claimed responsibility for a string of deadly terrorist attacks in Russia.

Born in April 1964 in the village of Kharsenoi, in the Shatoi region of southern Chechnya, Umarov graduated from the construction faculty of Grozny’s Oil Institute.

He was an active participant in both the 1994-96 and the 1999-2000 wars against Moscow, when he gained a reputation as a skilled and courageous commander.

Umarov told RFE/RL’s Russian Service in 2005 that he was in Moscow when the first Russian-Chechen war broke out, and as a patriot he said he considered it his duty to return to Chechnya to fight.

After the first war, President Aslan Maskhadov named Umarov to head the Security Council of the short-lived independent Chechnya.

During the second war, he commanded the “southwestern front” of the rebel armed forces.

Named as vice president of the self-declared Chechen separatist government in 2005, Umarov took over as president and resistance commander after the death of his predecessor (eds: Abdul-Khakim Sadullayev) in June 2006.

He had been accused of leading the hostage taking at a school in Beslan in September 2004 that left 334 people — most of them children — dead. But he condemned that school siege in his 2005 interview with RFE/RL and rejected the use of terrorism as a tactic.

In October 2007, Umarov proclaimed himself the leader of the Caucasus Emirate, a would-be Islamic state across the North Caucasus, causing a rift in the Chechen wing of the insurgency.

Ivan Sukhov, a journalist and respected North Caucasus expert, told RFE/RL that Umarov subsequently sought to “position himself as part of the global jihadist movement”:

“This date marked the moment when the North Caucasus separatist movement went from fighting in the 1990s and the early 2000s for Chechnya’s independence from Russia to being a religious movement,” said Sukhov. “From this moment on, the rebel leaders have officially regarded their motives as religious.”

Umarov was accused of organizing dozens of attacks against security forces and pro-Kremlin officials in the North Caucasus and a string of kidnappings for ransom.

He vowed last year to stop last month’s Winter Olympic Games in the Black Sea port of Sochi “using any methods that Allah allows us.”

Umarov was said to have ordered the November 2009 bombing of a train, the: Nevsky Express, from Moscow to St. Petersburg that claimed 26 lives.

He also claimed to have ordered the March 2010 attack by female suicide bombers on the Moscow subway that killed 39 people, as well as the January 2011 bombing at Moscow’s Domodedovo Airport that claimed 36 lives.

In a video, he said the airport attack was a response to “Russian crimes in the Caucasus” and that “God willing, such special operations will continue to be carried out in the future.”

Umarov had been declared dead several times by the Russian security services.

He was married with at least six children. Two of his brothers died in combat, while several other relatives have been kidnapped by unidentified armed men. His father’s death under unclear circumstances was reported in 2007.

According to analyst Liz Fuller, author of the “RFE/RL Caucasus Report,” Umarov “failed totally to justify the trust and hopes placed in him, both politically and militarily.”

Fuller says that “by abandoning the cause of an independent Chechen state and condoning acts of terrorism against Russian civilians, [Umarov] discredited the cause of Chechen independence in the eyes of the international community.”