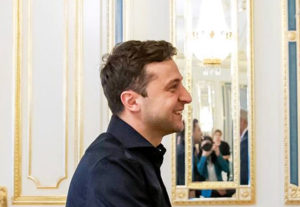 President Volodymyr Zelenskiy issued an order with the appointment on May 7.

The council was created in 2014 to carry out strategic planning and coordinate reforms.

Saakashvili has denied all the accusations and says the charges are politically motivated.

In 2015-2016, Saakashvili served as governor of Ukraine’s Odesa region. When he resigned, he accused Zelenskiy’s predecessor, Petro Poroshenko, of corruption. Poroshenko, in turn, stripped Saakashvili of his Ukrainian citizenship.

As one of his first acts as president last year, Zelenskiy restored Saakashvili’s Ukrainian citizenship, facilitating Saakshvili’s return to Ukraine.

Last month, Saakashvili said he had been offered the post of deputy prime minister in charge of reform. But it was unclear if parliament would confirm him.

Georgia called the possible appointment “unacceptable” in view of Saakashvili’s convictions there and threatened to withdraw its ambassador to Kyiv for consultations.