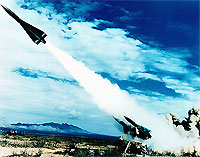 (Interfax – June 7, 2013) U.S. missile defense shields will not be able to stop Russia’s new intercontinental ballistic missile (ICBM), which was test launched successfully on June 6, from reaching its target, Russian Deputy Prime Minister Dmitry Rogozin said in his lecture as part of the Civil University project on Friday.

“We closely watched last night’s events. They were successful. We tested an intercontinental ballistic missile, which I call ‘a missile defense killer.’ Neither modern nor future American missile defense means will be able to stop this missile from hitting its target directly,” he said.

Russia will continue enhancing its potential “that will allow us to ensure our absolute freedom of action, should our country encounter any aggression,” Rogozin said.

“The Russian Federation’s state weapons procurement program will set such parameters of weapons and military hardware that will only be linked with responding to the threat of sixth-generation wars,” the deputy premier said.

Russia will develop appropriate aerospace systems and techniques that will be able to defeat any missile defense systems and will help maintain peace and balance in the world, he said.

The new ICBM prototype was successfully test launched from the Kapustin Yar site in Russia’s southern Astrakhan region on Thursday.