U.S.-Russia Deconflicting 75 Years Ago: Flares and Friendly Fire at the Elbe 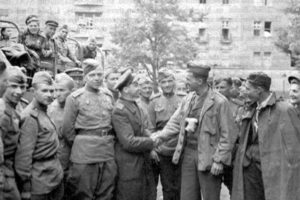 This month 75 years ago, U.S. and Soviet forces linked up on the Elbe River in Germany at the end of the European phase of World War II. The anniversary prompted current leaders of the U.S. and Russia to transcend the frosty relations between their countries and issue a rare joint declaration that cited the meeting as “an example of how our countries can put aside differences, build trust and cooperate in pursuit of a greater cause.” What the declaration did not say, however, is that the April 25, 1945 link-up featured some deliberate flouting of military orders that led to friendly fire. On that day, U.S. Army and Red Army servicemen took turns violating orders issued by their commanders to ensure a safe and orderly meeting at the Elbe River, including instructions to fire green (U.S. Army) and red (Red Army) flares and a ban on straying outside zones designated for patrol (U.S. Army), according to an account based on first-hand recollections of that meeting’s participants published in Russia’s Kommersant daily.

One of the servicemen to violate these instructions was Lt. William Robertson of the 69th U.S. Army division. Robertson chose to drive up to the Elbe River, well beyond the 5-mile zone set by his commander for his patrol. Having reached the Elbe near the town of Torgau, Robertson tried to signal to Soviet forces across the river. Having no flares to do so, he waved a makeshift U.S. flag. (He and his patrolmen had fashioned the flag out of a bed sheet, which they dyed in colors of U.S. flag with substances they had found in a drug store, according to Robertson’s account in Christian Science Monitor).1 The Soviet forces responded to this signaling with fire. A skeptical Lt. Alexander Silvashko of the 58th Red Army rifle infantry division thought the flag had been made by Germans as a ploy, so he ordered two artillery shots fired at the castle tower across the river, from which Robertson was waving his flag. (The Soviets also fired two green rather than red flares, according to Robertson’s account of the event). Fortunately, both shots missed, but they did convince Robertson to find another way. The enterprising U.S. officer ended up recruiting a liberated Russian prisoner of war, a native of Moscow, who shouted to Silvashko and his men that the soldiers next to him were Americans. With the misunderstanding cleared up, Robertson and one of his patrol members crawled onto the semi-ruined bridge, where he first met Soviet Army (RKKA) Sgt. Nikolai Andreev, who was crawling westward, according to a book by Karl-Heinz Lange. It was when Robertson reached the east bank around 2:00pm that he met Silvashko and his patrolmen, and a photo of them was taken to become the symbol of the Elbe link-up (they reenacted that moment in 1987 and it can be viewed in Kommersant’s article).

An impromptu celebration ensued on the Russian side of the river, after which Robertson’s patrol eventually returned to their headquarters. They were accompanied by Silvashko and three more servicemen of the 173rd Red Army regiment, including deputy commander of the regiment Maj. Anfim Larionov and Capt. Vasily Neda. While the four RKKA servicemen were given a warm reception that featured whiskey and brandy and lasted till the early hours of April 26, Robertson was reputedly being considered for court martial for violating his commander’s order not to venture beyond the 5-mile patrol zone, according to co-founder of the Elbe Group Gen. Kevin Ryan’s account of the events. In the end, Robertson’s commander did not charge him. For its part, the Soviet military counter-intelligence investigated the four RKKA men for unauthorized contact with the Americans. Capt. Neda was relieved of his post and Maj. Larionov was excluded from the Communist Party. Lt. Silvashko was spared, as Soviet military counter-intelligence concluded he was following the superiors’ orders. One of the subsequent U.S.-USSR celebrations, which RKKA top brass did authorize, took place on April 27 near the Elbe and featured multiple toasts, including a U.S. Army intelligence officer shouting in Russian: Да здравствует советская пехота! (Long live the Soviet infantry!), according to the Kommersant article.

While describing the Robertson-Silvashko link-up in some detail, the Kommersant article also reminds us that this meeting was not the first. In fact, two more patrols of the 273rd Regiment of the 69th U.S. Army Division encountered units of the 58th Red Army Rifle Infantry Division in two other locations on April 25, 1945. The first of the U.S. patrols to link-up with the Soviets was under the command of U.S. Lt. Alfred “Buck” Kotzebue. Like Robertson (but earlier), Kotzebue ignored patrol area restrictions set by his commanders and reached the Elbe, according to a book by Carolyn Woods Eisenberg and the account in Kommersant. Kotzebue’s patrol encountered a patrolling Red Army cavalryman at 11:30am on April 25. The cavalryman, an ethnic Kazakh by the name of Aitkaly Alibekov, told the patrol how to find their way to the Soviet forces across the Elbe River. Having reached the river, Kotzebue’s patrol fired green rockets, whereas the Soviet side did not fire any in response, according to the U.S. account of the encounter (the Russian side insists that Red Army soldiers across the river did respond with flares), according to Kommersant. Having established contact with the Red Army servicemen, Kotzebue and his comrades then crossed the river in a boat near the town of Strehla, using rifle butts as paddles according to Kotzebue’s account in Christian Science Monitor.2

According to a book by John Toland, Kotzebue, who had stayed well ahead of his communications vehicle to prevent commanders from ordering him back, apparently did not radio his headquarters about the link-up. Having not heard from Kotzebue’s patrol, the U.S. command sent two planes for reconnaissance, but both were shot at, according to the account in Kommersant. The U.S. commanders also ordered another patrol in the area, commanded by Maj. Fred W. Craig, to investigate. Craig’s patrol linked up with Soviets, too, and were taken to the same headquarters of the 175th Red Army regiment, prompting a second round of celebrations there. Craig did radio his commanders to let them know he’d found Kotzebue and contacted the Soviets.

Today, U.S. and Russian militaries have much more reliable and advanced means to communicate with each other than flares and field radios, and it is my hope they will continue to use those to prevent an accidental conflict no matter how tense the political dimension of the bilateral relationship becomes (although some of these modern channels were as unreliable as commercial phones, as was the case with Syria operations). I also hope that U.S. and Russian military servicemen in Syria, in the European theater and elsewhere will stick to deconfliction rules as outlined by their commanders. The U.S. and Russia are no longer allies, to put it mildly, and the might and range of weapons their militaries have acquired since 1945 would make any bending of deconfliction rules fraught with consequences that could prove much more harmful than those that the heroic patrolmen on both sides of the Elbe River could have possibly sparked 75 years ago. Those brave patrolmen’s judgement was understandably impacted by the anticipation of the end of combat and the desire to meet allies on the banks of the Elbe. No such excuses exist today.

The author would like to thank Brigadier General (retired) Kevin Ryan for reviewing a draft of this article.

1. Given all this color, I think there could be another movie in the Elbe link-up, a U.S.-Russian one, perhaps, but that’s another story. (I say “another” because “Encounter at the Elbe” was shot (pardon the unintended pun) during Stalin’s rule and released in Soviet movie theaters in 1949.)

2. Of the three Soviet servicemen who welcomed Lt. Kotzebue on the other bank, one was a Soviet photographer, Grigory Khomutov, whose nickname was Khomzor. It was derived from his habit of signing the back of photos he brushed up before WWII, “Khom.30.R” (short for Khomutov, 30 rubles-the fee for brushing one photo, according to the Kommersant account).

Article also appeared, with different images, at russiamatters.org/blog/us-russia-deconflicting-75-years-ago-flares-and-friendly-fire-elbe, with different images, bearing the notice: “© Russia Matters 2018 … This project has been made possible with support from Carnegie Corporation of New York,” with a footer heading entitled “Republication Guidelines” linking to: russiamatters.org/node/7406, which bears the notice, in part: