NEWSWATCH: “Porton Down experts unable to identify ‘precise source’ of novichok that poisoned spy; The lab’s boss says a ‘state actor’ made the novichok and also rubbishes claims that it could have come from his facility.” – Sky News (UK)/Paul Kelso

“… Gary Aitkenhead, chief executive of the Defence Science and Technology Laboratory (DSTL) at Porton Down, told Sky News they were not yet able to prove it was made in Russia. … ‘We were able to identify it as novichok, to identify that it was military-grade’ … he confirmed the substance required ‘extremely sophisticated methods to create, something only in […]

“British officials investigating the poisoning of Sergei V. Skripal … former Russian double agent, believe it is likely that an assassin smeared a nerve agent on the door handle at his home. … so risky and sensitive that it is unlikely to have been undertaken without approval from the Kremlin …. Skripal … was freed in a spy swap with […] 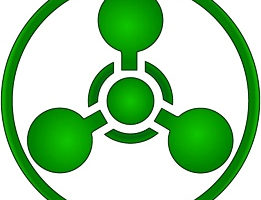 (Kremlin.ru – September 27, 2017) The President listened to a report via videoconference on the destruction of Russia’s last remaining chemical weapons. Mikhail Babich, Presidential Plenipotentiary Envoy to the Volga Federal District and Chairman of the State Commission for Chemical Disarmament, reported to President Vladimir Putin on the completion of chemical disarmament ahead of schedule. Also in attendance at the […]

MOSCOW. April 13 (Interfax) – Russia has submitted an initiative during a special session of the Executive Council of the Organization for the Prohibition of Chemical Weapons (OPCW) in The Hague on Thursday to set up a mission under OPCW auspices to investigate the chemical incident in Syria’s Idlib governorate, Russian Foreign Minister Sergei Lavrov said at a press conference. […]

[“Russia, NATO plan joint operation on Syria’s chemical weapons” – Reuters – Gabriela Baczynska and Adrian Croft – February 14, 2014 – reuters.com/article/2014/02/14/us-syria-crisis-russia-nato-idUSBREA1D0Y120140214] Reuters covers plans for a NATO-Russian joint naval operation in the Mediterranean to protect a U.S. ship playing a role in the destruction of Syrian chemical weapons.  The mission would be a cooperative step even as Russian […] 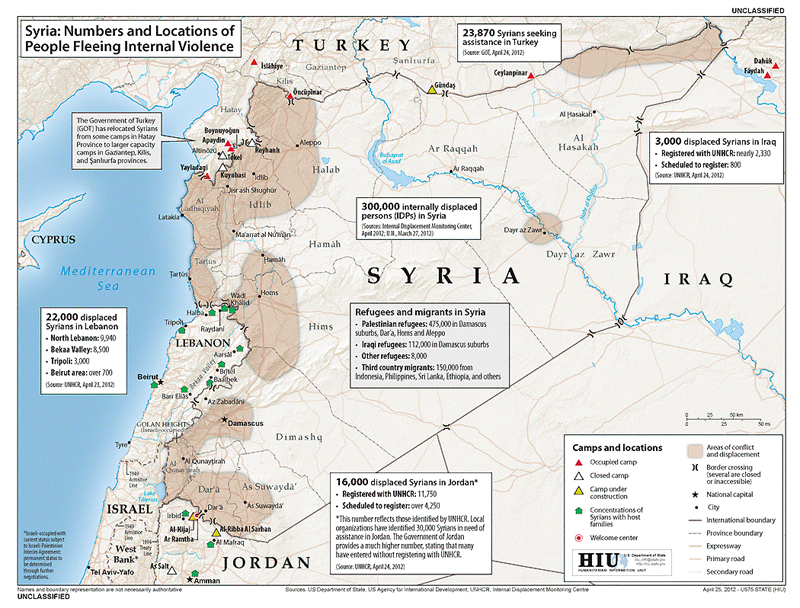 MOSCOW, January 7 (RIA Novosti) The first consignment of chemical weapons has left the Syrian port of Latakia on a Danish cargo vessel, the international chemical weapons watchdog said on Tuesday. “The removal of the first consignment of priority chemicals from the Syrian Arab Republic took place today,” the Organization for the Prohibition of Chemical Weapons (OPCW) said in a […]

MOSCOW, November 8 (RIA Novosti) ­ Russia considers unfounded US skepticism over the sincerity of Syria’s declaration of its chemical weapon stockpiles, a Russian Foreign Ministry spokesman said Friday. US envoy to the United Nations Samantha Power said earlier this week that Washington was closely reviewing Syria’s declaration of its chemical weapons stockpiles, in light of a history of “years […]

Interfax: Russia about to decide on degree of its financial contribution to Syria’s chemical disarmament – diplomat

MOSCOW. Nov 1 (Interfax) – Russia will make a decision on the degree of its financial contribution to the destruction of Syria’s chemical weapons in the near future, Deputy Foreign Minister Sergei Ryabkov said. “The Russian material contribution was considered during these consultations. We don’t yet have a reason to publicly announce its parameters, but we are about to make […]

(Interfax – BRUSSELS, October 15, 2013) Russian Foreign Minister Sergei Lavrov has called the Russian-U.S. understandings on Syria’s chemical weapons a renaissance of diplomacy aimed not at building coalitions but at reaching common goals. Speaking at the Brussels-based Royal Institute for International Relations (Egmont Institute), Lavrov suggested that the world has switched to a polycentric from a bipolar system of […]

Taking the U.S.-Russia framework seriously; Cooperation between the White House and Kremlin may even bear fruit.

(Russia Beyond the Headlines – rbth.ru – Alexander Gasyuk, Nora FitzGerald, special to RBTH, October 8, 20-13) There is a long journey ahead to audit and destroy Syria’s chemical weapons program, analysts agree, and there are many concerns and inevitable delays in the days and weeks ahead. Yet the international community is closer than it has ever been to eradicating […]

(Interfax – October 8, 2013) Russian President Vladimir Putin has welcomed the Syrian leadership’s response to the Russian-US proposal for eliminating the country’s chemical weapons, adding that he hoped this work would continue in the pace and spirit it had started in. He also expressed satisfaction with the position his US counterpart Barack Obama had taken on Syria. Putin was […]

Interfax: Judging by how chemical weapons liquidation proceeds in Syria, we are on right path – Putin

(Interfax – MOSCOW, October 2, 2013) Russian President Vladimir Putin said he was content with the situation development regarding chemical weapons liquidation in Syria. “Judging by what work related to the Syrian chemical weapons liquidation is currently being held, we have grounds to think that we are on the right path,” Putin said when answering questions at the Investment Forum […]

Moscow to Conduct Its Own Probe into Syria Chemical Attacks

(RIA Novosti – MOSCOW, October 1, 2013) ­ Russia announced Tuesday it will carry out its own investigation into chemical weapons attacks in Syria as an international disarmament inspection team, reportedly comprising one Russian, arrived in the Middle Eastern nation. Russian Foreign Minister Sergei Lavrov said Moscow wanted to establish who was behind the August poison attack and criticized Western […]

(RIA Novosti – MOSCOW, September 26, 2013) ­ Russian Foreign Minister Sergei Lavrov said in an interview with a US newspaper published Thursday that homemade sarin nerve agent was used in a chemical weapons attack in Damascus on August 21, an attack that the United States maintains was carried out by the Syrian regime. Lavrov gave an interview to The […]

Kremlin aide: there may be ‘some pretext’ for war on Assad if chemical arms scrapped 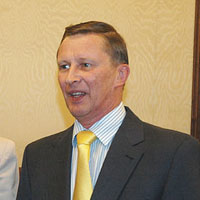 (Interfax – VLADIVOSTOK, Russia, September 23, 2013) Syria may still be in danger of a military strike from abroad if it fulfills its commitment to scrap all its chemical weapons because there may be “some other pretext” for war, the Kremlin’s top aide said. Sergei Ivanov, president Vladimir Putin’s chief of staff, said in a program on Saturday on Russia’s […]

(Interfax – MOSCOW, September 24, 2013) Any arguments presented by the West that it was President Bashar al-Assad’s regime that carried out a chemical attack in the suburbs of Damascus on August 21 can be overturned, which is being done today, Russian Deputy Foreign Minister Sergei Ryabkov said. “Strong objections can be presented in response to all of the arguments […]

UN May Permit Force in Syria Only If Obligations Unfulfilled – Moscow

(RIA Novosti – MOSCOW, September 24, 2013) ­ The United Nations Security Council may permit armed intervention in Syria only if that government refuses to fulfill obligations, such as removing chemical weapons stockpiles, a senior Russian government official said Tuesday. Washington and Moscow are expected to clash at the UN General Assembly later this week over the terms of a […]

(Interfax – MOSCOW, September 19, 2013) The estimates of Syrian President Bashar al-Assad, according to which the disposal of Syrian chemical weapons would require approximately one year and cost about $1 billion, are fairly accurate, Chairman of the Council on the Foreign and Defense Policy Fyodor Lukyanov said. “It is probably close to the truth. What foreign countries are saying […]

(Interfax – MOSCOW, September 18, 2013) Russia intends to provide the proof, provided by Damascus, that the opposition used chemical weapons in eastern Ghouta near Damascus, to the UN Security Council. “Of course, we will provide all of this to the UN Security Council,” Russian Foreign Minister told reporters following his speech at the Valdai Discussion Club. This proof has […]

(RIA Novosti – September 17, 2013) Armed Syrian opposition could have used parts of Soviet ammunition when preparing the chemical attack in the vicinity of Damascus, editor-in-chief of the Natsionalnaya Oborona (National Defense) magazine Igor Korotchenko told RIA Novosti news agency on 17 September. The UN report confirming the use of chemical weapons in Syria, which was published on 16 […]

(RIA Novosti – Valday, Novgorod Region, September 17, 2013) The parts of Soviet-made munitions found by UN inspectors near Damascus belong to projectiles used in multiple-launch missile systems that the Syrian army took out of service long ago and have probably been improvised to carry chemicals, the director of the Centre for Analysis of Strategies and Technologies, Ruslan Pukhov, has […]

(RIA Novosti – Carl Schreck – WASHINGTON, September 17, 2013) ­ The United States and Russia remained at loggerheads Tuesday over the potential use of force against Syria should Damascus fail to abide by a US-Russian plan to secure chemical weapons stockpiles controlled by the government of Syrian President Bashar Assad. Washington is pushing for a UN Security Council resolution […]

(Interfax – MOSCOW, September 16, 2013) Before the current international diplomatic crisis over the reported chemical arms attacks in a Damascus suburb on August 21, the United States had contacted the Syrian government to find out how safe its chemical stockpiles were, according to Russian Foreign Minister Sergei Lavrov. “We were working with the Syrians directly to understand the how […]

(RIA Novosti – Carl Schreck – WASHINGTON, September 11, 2013) The White House has vowed that no American boots will be on the ground in Syria, but a Russian proposal to seize and destroy Syria’s chemical weapons would almost certainly require an international security force, experts said Wednesday. “Boots on the ground will be necessary. The question is: ‘Where will […]

(kremlin.ru – September 12, 2013, also posted by the New York Times on September 11, 2013, as “A Plea for Caution From Russia” at http://www.nytimes.com/2013/09/12/opinion/putin-plea-for-caution-from-russia-on-syria.html) The article by Vladimir Putin published in The New York Times. Recent events surrounding Syria have prompted me to speak directly to the American people and their political leaders. It is important to do so […]

(Moscow Times – themoscowtimes.com – Ivan Nechepurenko – September 11, 2013) Britain, France and the U.S. are set to table a resolution on Syria’s chemical weapons in the UN Security Council on Tuesday evening as a Russian plan to avert a U.S.-led military strike against Syria has garnered overwhelming global support. The announcement came after Foreign Minister Sergei Lavrov on […]

(Interfax – September 11, 2013) Syrian insurgents possess chemical weapons, and Russia has given proof that they have used these weapons on Syrian territory to the UN Security Council, Russian State Duma international affairs committee head Alexei Pushkov said at a Duma plenary session on Wednesday. The Duma plans to issue a statement on the situation in Syria later in […]

TRANSCRIPT: [Putin] Comments on the chemical weapons situation in Syria

(Kremlin.ru – September 10, 2013 – Novo-Ogaryovo, Moscow Region) QUESTION: Mr President, everybody’s talking about Syria, chemical weapons and bringing Syria’s chemical arsenal under international control. We have just received a report from Washington saying you discussed this matter with President Obama at the G20 summit in St Petersburg. Is it true? Did you talk about this? And if so, […]