Russia’s Inability to Deal with Its Past Imperils Its Future, Inozemtsev Says 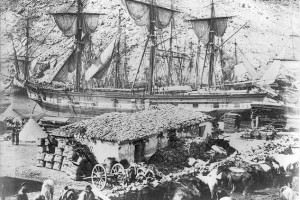 Russians love to compare themselves and their country with others and especially with the United States and to ask why others have done better than they have, Vladislav Inozemtsev says; but in general, Russians focus on differences in economic, legal or belief systems rather than on the critical problem of national memory.

In yesterday’s “Gazeta,” the Moscow economist and commentator argues that the differences between how Russians deal with their past and how Americans deal with theirs are critical for an understanding now only of how the two countries have developed but also of how they will evolve in the future (gazeta.ru/column/vladislav_inozemcev/8161691.shtml).

Americans view their history differently than Russians do. There are many pages from the American past that Americans are not especially proud of, but they do not try to obliterate them from their national narrative but rather to incorporate them as part of a common story of how these evils were overcome.

An example of this, Inozemtsev says, is the fact that on the Washington Mall, there is a Museum of the History of American Indians. That may not seem so unusual, but “try to imagine a museum in Moscow in which would be assembled reports about Russian wars in the North Caucasus in the 19th century or the deportation of Chechens or Crimean Tatars in 1944.”

Also on the Washington Mall is a monument to Martin Luther King who “using contemporary language was the main human rights defender in US history.” Try again to imagine “a monument to Andrey Sakharov on the place let us say of the Cathedral of Christ the Savior” in Moscow.

That list can be extended to include memorials to wars that Americans remain proud of and wars where their losses were such that they have very different feelings. Russians should try to imagine the erection of a memorial complex in their capital devoted to “Soviet soldiers who fought even in Afghanistan.”

But of course, the Moscow commentator continues, the issue is “not only about monuments but about memory as a phenomenon. In Russia, in recent times, people have talked a lot about respect for the thousand-year history of our country, but a mass of questions has arisen about whether it is worthy of that.”

“In America,” Inozemtsev points out, “people talk less about history than they do in Russia, but they protect and preserve it much more carefully because Americans don’t confuse history and ideology.” That allows them to integrate various aspects of their history to form a common narrative rather than splitting them apart as happens in Russia.

In Russia, he notes, history has always been at the service of ideology, “and today when the latter de facto doesn’t exist … patriotism is declared the national idea – a stranger combination it would be difficult to come up with … and therefore it become brutal and faceless.”

“Of course, it would be absurd to assert that history is not used in America for promoting the unity of the nation and support in the population of feelings of membership in a unique, powerful and great country.” But there is one important distinction: in American history, there are few purely “‘negative'” personalities that divide the population into opposing camps.

Many American presidents have left office deeply unpopular, but Americans at all levels do not exclude them from the national narrative. And that has an important consequence: “when historical personalities do not consider their chief task to be the settling of accounts with their predecessors or opponents, they do not have to rewrite history.”

The contrast with Russia is strikingly obvious. Each new leader feels compelled to blacken his predecessors or even write them out of the historical narrative of Russia altogether, an approach which not only fragments the nation but changes the way each generation of leaders views the future, one in which its members fear the same thing will happen to them.

Some Russians recognize these dangers, but their efforts to combat the approach of those in power have been marginalized. And they have seldom been able to do much to overcome the “black and white” approach to Russian history of the new “‘common course'” that each new Russian leader wants.

Thus, Inozemtsev says, “Russia is not America” because it cannot find in itself the potential for public concord and the agreement of various parts of society to deal with each other and with the past on the basis of respect even if not of total agreement. And because they can’t, their leaders behave as they do.

Each generation of Russian leaders fears that just as it has destroyed the reputation of its predecessors, its own reputation “and at times its freedom or even life” will be destroyed in the future. That leads to putting money in offshore accounts and ignoring the needs of the population both now and in the longer term.

Given Russian attitudes toward history, what these leaders are doing is “perfectly rational because they do not consider this country their own.” Instead, they recognize as have their predecessors that they are in large part “accidental” leaders. Consequently, Inozemtsev says, he has no interest in condemning them for this as such.

But at the same time, he points out, such people should not talk about Russia “catching up” with or surpassing America because until Russian attitudes toward the past change, Russian possibilities for the future won’t.