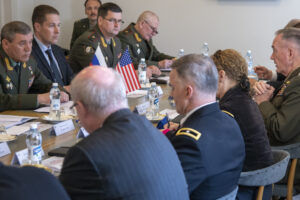 MOSCOW. Aug 7 (Interfax) – The U.S. policy aimed at withdrawing from the agreements limiting nuclear weapons may have negative implications for the entire world, representatives of the Russian General Staff said in an article published by the Krasnaya Zvezda newspaper on Friday.

“The future of the Nuclear Non-Proliferation Treaty (NPT) and the Comprehensive Nuclear-Test-Ban Treaty (CTBT) is a big question. The NPT dismantlement could trigger a global arms race and increase the number of states possessing nuclear weapons, first and foremost ‘threshold” states,” the article said.

“As for the CTBT, Russia undertook the obligations deriving from that treaty 20 years ago. For their part, the Americans signed the CTBT in 1996 but have not ratified it so far. Notably, North Korea acts as the United States’ ‘ally’ in terms of the attitude to this treaty,” the article said.

“In 2006, those two countries, in contrast to 172 states, refused to adopt the UN General Assembly resolution declaring the necessity of the soonest signing and ratification of the CTBT,” the authors said.

[featured image is file photo of U.S. and Russian military personnel from another occasion, including senior figures, with photo credit to Dominique A. Pineiro]