RUSSIALINK: “No substantial progress made on operations of Russian, U.S. embassies at talks with Nuland – Deputy FM Ryabkov” – Interfax

MOSCOW. Oct 12 (Interfax) – Russia does not rule out a further escalation of tensions in bilateral relations with the United States, in particular, in the functioning of Russian and U.S. embassies, and this concern has been relayed to the U.S. side, Russian Deputy Foreign Minister Sergei Ryabkov told Interfax on Tuesday. 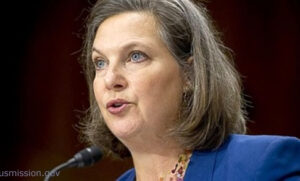 He held consultations with U.S. Under Secretary of State for Political Affairs Victoria Nuland earlier today.

“We had a comprehensive, rather profound discussion of bilateral matters. Besides the under secretary of state for political affairs, the U.S. delegation included a White House representative, which made our conversation straightforward and quite frank,” Ryabkov said in comments on the consultations.

As to whether any progress was made, in particular, on the issuance of visas, the restoration of the level of diplomatic personnel, and the operations of embassies in both countries, Ryabkov said, “I cannot say we made much headway. Those issues, visas, the terms of embassy operations, rotation of diplomatic staff, and overall normalization of the activity of Russian diplomatic missions in the United States and U.S. diplomatic missions in Russia, have substantial crisis potential, and we do not rule out certain escalations in those areas. This is what we told our American colleagues frankly.”

“There are some other areas of bilateral work, we should call them sectoral, where we have grounds to intensify the dialogue, and I believe that our relevant agencies will address these matters in the foreseeable future,” Ryabkov said.

“We have agreed not to delay a specialized round of expert consultations on the issue, and this is also important,” he said.

“However, progress on the substance of current problems has been miniscule. There is also a risk of new escalations,” Ryabkov said.