RUSSIALINK: “Archie Brown Is Awarded the Pushkin House Book Prize: ‘The Human Factor: Gorbachev, Reagan and Thatcher and the End of the Cold War'” – Moscow Times

The 9th Pushkin House Book Prize was awarded to Archie Brown, Emeritus Professor of Politics at the University of Oxford, for “The Human Factor: Gorbachev, Reagan and Thatcher and the End of the Cold War,” published by Oxford University Press. 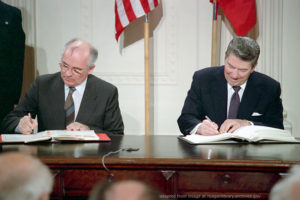 How important was the true-believing communist son of Stavropol peasants, the actor son of a Midwestern traveling salesman, or the staid, provincial daughter of a Lincolnshire shopkeeper? […]

(Moscow Times – themoscowtimes.com – Des Brown – April 21, 2015) Just over 30 years ago, Mikhail Gorbachev became general secretary of the Communist Party of the Soviet Union. The next day, The Times of London ran an editorial entitled “Mr Gorbachov’s Hour” – the British media had yet to learn to spell his name – saying that he could […]