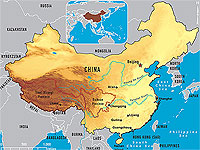 In an interview with Chinese media ahead of a visit by a Russian delegation on April 15, Shuvalov said Russia and China should deepen investment cooperation in various areas, including energy.

“We need real innovation and major projects. We are going to China to discuss the particular options for these projects,” the Prime news agency quoted Shuvalov as saying.

Shuvalov said the visit should give an impetus to agreements reached during the March visit of newly elected Chinese President Xi Jinping to Russia.

Russian investors are interested in participating in oil refinery projects and retail sales of oil products in China. In turn, Russia is ready to attract Chinese investors to a wide range of projects, including in the Far East, he said.

“A month ago I heard more concerns from special bodies and ministries that it would be better if only Russian investors were here [in Russia] as this is a matter of strategic interest. Today we don’t have such an approach anymore and even when we are talking about mineral extraction companies we are ready to invite Chinese investors to such joint projects,” Shuvalov said.

The two sides are yet to agree terms for a potentially huge 30-year gas supply deal which President Putin discussed with President Xi in March, in which Russia would supply Beijing with up to 30 billion cubic meters of gas a year via pipelines in Siberia.

Trade between China and Russia stood at a record-high $88.16 billion in 2012, up 11.2 percent year-on-year. Russia and China have good prospects of reaching the $100 billion bilateral trade target set for 2015 earlier than expected, Shuvalov said.