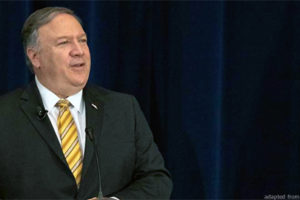 With U.S. Secretary of State Mike Pompeo’s visit to the region, the 2020 round of the Eurasian bazaar is in session. This is where the countries that border Russia attempt to bargain with the United States to obtain passes for their human rights records, to extract military or economic aid or to secure guarantees of American support for the “Western vector” in their foreign policies-usually by playing up the specter of a menacing Vladimir Putin, and, increasingly, the challenge of a rising China. It is only rational, after all, for smaller countries in the shadow of greater powers to seek to leverage American power and influence in order to improve their bargaining positions vis-a-vis Moscow and Beijing. No one embodies this process more than Belarus’ long-serving president, Alexander Lukashenko, who regularly shifts from being described by the U.S. as “Europe’s last dictator” and “Moscow’s closest ally” to an embattled leader fighting for the sovereignty and independence of a small European state menaced by Muscovite machinations to restore its empire.

However, there is always a problem with how this plays out in reality due to the “say-do” gap in American foreign policy—the chasm that looms between the rhetorical statements of support and what Washington is actually prepared to concretely deliver. After all, much of what Pompeo announced during his trip is a relaunch of initiatives that were proposed four years ago by the Obama administration and which were largely left to wither on the vine by its successor. There is also the tendency to take what are relatively modest measures—for instance, the several hundred million dollars in military aid to Ukraine which has served as the basis of U.S. President Donald Trump’s impeachment trial—and impute to them much more dramatic geopolitical consequences. While Pompeo’s predecessors in the Clinton, Bush and Obama administrations had to confront this issue, Pompeo is faced with several additional factors that complicate his messaging.

First and foremost, he cannot be said to be speaking with the voice of the president. As we have seen consistently during this administration, American policies designed to challenge Russian dominance in the Eurasian space have either proceeded as a result of autopilot within the bureaucracy (as with the Treasury Department’s continued enforcement of U.S. sanctions on Russia) or because Congress has imposed them via veto-proof majorities. All of Pompeo’s pronouncements-in Kyiv, Minsk, Nur-Sultan or Tashkent-are one tweet away from being contradicted. Until we see both senior administration officials signaling that this strategy is a priority-and guaranteeing that the necessary financial resources flow forth-the documents remain aspirational and symbolic.

Second, there is no longer a concerted, united Euro-Atlantic effort. While the EU and the United States share a common interest in keeping the economic corridors between the West and post-Soviet states open, Pompeo embraces the language of great power competition at a time when German Chancellor Angela Merkel and French President Emmanuel Macron are exploring the possibility of a new detente with Moscow. As Berlin and Paris are hoping to nudge the Volodymyr Zelenskiy administration in Ukraine toward painful compromises with Russia, Pompeo’s statements in Ukraine will encourage those factions around Zelenskiy opposed to making concessions to hold out in hopes for additional American aid.

Third, there is no particular groundswell of public support within the United States for making the Eurasian space the focal point of “great power competition”; however, there is consistent support for liquidating the American military enterprise in Afghanistan, which would further diminish the importance of Central Asia. In a 2019 Pew Research Center poll, 59 percent of U.S. respondents said the war in Afghanistan was “not worth fighting,” while a 2018 poll shows that 49 percent of U.S. respondents feel the U.S. did not achieve its goals in Afghanistan. Even within the U.S. government, we are poised to see major bureaucratic and budgetary battles as to where the focus of American efforts should lie. For every advocate who argues for inserting American power betwixt Russia and China in the Eurasian space, there are others battling for more attention and resources for Africa and Latin America, claiming they are the more important venues where the U.S. should be defending American interests against other great powers, not to mention increasing the U.S. presence in the broader Indo-Pacific basin. The reality is that the Eurasian space is of secondary consideration in terms of direct issues impacting the U.S. homeland. Yes, there is always the threat that radical groups could regain safe havens in places like Afghanistan, but an over-the-horizon anti-terrorist task force mobilized to neutralize such challenges does not require a major U.S. footprint in the region. U.S. trade with this part of the world is only a fraction of the over $50 billion trade turnover between the five states of Central Asia and China and Russia, meaning that Beijing and Moscow have significantly more skin in the game. Indeed, the importance of Central Asia—or even Ukraine and Belarus—to Washington has always been on how developments in this part of the world create issues or difficulties for U.S. partners and allies in Europe.

But even here we see shifts. In the 1990s, the argument was that Washington needed to play the leading role in creating a new energy infrastructure that would allow the region’s resources to bypass Russian control in order to feed European markets. Today, the Trump administration would prefer that European allies purchase their energy from North American sources. Indeed, given Belarus’ current disputes with Moscow, Pompeo leaped at the opportunity to promote the U.S. as an alternate supplier—but with the understated proviso that U.S. energy would be sold at world market prices, with no offer of any loans from Washington to offset the costs. At the same time, countries like Turkmenistan are beginning to realize that the Russia-China competition can give them greater room to improve their bargaining position even without the U.S. playing a major role.

Pompeo’s visit allows the non-Russian states of the region to leverage a modest degree of American involvement to improve their bargaining positions against Moscow and Beijing. But no one should have any illusions about the degree of U.S. support. The vaunted C5+1 process (the five states of Central Asia with the United States), like the Georgia-Ukraine-Azerbaijan-Moldova (GUAM) format, has little chance of dramatically reshaping the region. This is especially true in light of the amount of resources China and Russia bring to the table, just as Russia’s involvement in Latin America cannot cancel out the overwhelming advantages the United States has in setting the hemispheric agenda in the west. Presidents Shavkat Mirziyoyev of Uzbekistan and Qasym-Zhomart Toqaev of Kazakhstan (along with former Kazakh President Nursultan Nazarbayev) understand this very well. Lukashenko and Zelenskiy, however, hold out hope that the United States will do more to help them decrease their linkage to Russia. The Kremlin is also assessing Trump’s signal that in an era of great power competition, the U.S. intends to vigorously contest for influence. What Pompeo’s visit has not yet settled is how far the Trump team plans to compete in the eastern European borderlands between Russia and the West.

Nikolas Gvosdev is a senior fellow at the Eurasia Program and Program on National Security of the Foreign Policy Research Institute (FPRI).

Article also appeared, with different images, at russiamatters.org/analysis/pompeos-visit-lets-post-soviet-states-leverage-us-backing-against-russia-china-real, with different images, bearing the notice: “© Russia Matters 2018 … This project has been made possible with support from Carnegie Corporation of New York,” with a footer heading entitled “Republication Guidelines” linking to: russiamatters.org/node/7406, which bears the notice, in part: