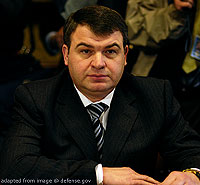 MOSCOW. Nov 7 (Interfax) – More than half of Russians – 58% – appreciated President Vladimir Putin’s decision to dismiss Anatoly Serdyukov as defense minister, and nearly half – 49% – approved of Sergei Shoigu’s appointment to the job, the www.superjob.ru web portal found after polling 1,600 Russians on Tuesday.

Putin announced Serdyukov’s dismissal at a meeting with Shogu earlier in the day. Before this appointment, Shoigu served as the governor of the Moscow region.

“In view of the situation surrounding the Defense Ministry, in order to create objective conditions for investigating all issues, I have made the decision to relieve Defense Minister Serdyukov of his duties,” Putin said.

Some of the respondents polled by the web portal said in commenting on the move: “Vladimir Putin does not make thoughtless decisions” and “This should have been done a couple of years earlier, before the army was totally ruined.”

Only 4% of those polled disapproved of Serdyukov’s dismissal, and another 38% were undecided.

The respondents who praised Shoigu’s appointment said he has the experience building a service from scratch (Shoigu earlier served for years as the first Russian emergency situations minister) and that he has better chances to resolve problems in Russia’s armed forces than almost any other candidate. “It’s too bad Shoigu can’t be cloned. There are a lot of other ministries here,” said one respondent.

However, 18% disapproved of Shoigu’s appointment.

“Can it really be that this country doesn’t have worthy military specialists having the necessary experience and education? After all, Shoigu started working in the Moscow region quite well,” one of such respondents said.

About 33% of those polled were undecided about Shoigu’s appointment.