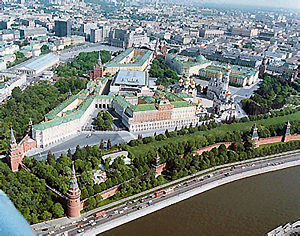 Describing the threat of extremism, Putin pointed to color revolutions. “In the modern world extremism is often used as a geopolitical instrument to rearrange spheres of influence. We see the tragic consequences of the wave of so-called ‘color revolutions,’ the turmoil in the countries that have undergone the irresponsible experiments of covert and sometimes blatant interference in their lives,” Putin said, according to a transcript of the speech posted on the Kremlin’s website.

“We take this as a lesson and a warning, and we must do everything necessary to ensure this never happens in Russia,” he added.

The president went on to assure that the country’s anti-extremism measures had “nothing to do” with fighting the opposition.

The battle against extremism is not the job of law enforcement agencies alone, he said, urging help from all levels of government, institutions of civil society, educational institutions and “representatives of the traditional religions in Russia.”

Putin also used his meeting with the Security Council to call on his government to tighten migration regulations as a tactic to counter extremism.

“We still have quite a few problems here that have to do with illegal, uncontrolled migration,” Putin said. “We know that this breeds crime, interethnic tensions and extremism. We need greater control over compliance with regulations covering migrants’ stay in Russia, and we have to take practical measures to promote their social and cultural adaptation and protect their labor and other rights.”