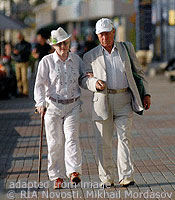 Russia saw virtually no increase in life expectancy from 1990 to 2010 and lagged behind more than 100 countries in the key health statistic over that period, according to a global study released Tuesday.

The study, called the Global Burden of Diseases Study 2010, says that while global life expectancy increased by nearly five years from 1990 to 2010, in Russia it grew by only a few months.

A report on the study, conducted by the Institute for Health Metrics and Evaluation at the University of Washington in the United States, called it “the largest systemic scientific effort in history to quantify levels and trends of health loss due to disease, injuries and risk factors.” Researchers collected data on just under 300 illnesses, traumas and other health threats in 187 countries.

The study was to be presented Tuesday afternoon at the Bill & Melinda Gates Foundation in Seattle, by the institute’s director, Dr. Chris Murray, and philanthropist Bill Gates, whose foundation distributes millions of dollars to health causes every year.

However, according to Russian state statistics, life expectancy made a bigger jump in 2011, the last year for which data are available. That year, life expectancy increased to 69.8 years overall  64 years for men and 75.6 years for women.

Russian authorities have identified demographics as one of the country’s biggest problem areas and have targeted harmful lifestyle choices in an effort to prolong Russians’ lives.

Over the past year, lawmakers have passed legislation restricting smoking in public places, banning nighttime alcohol sales, increasing prices for cigarettes and spirits and limiting advertising of alcohol and tobacco on television.

In May, President Vladimir Putin issued a decree ordering the government to secure a rise in Russian life expectancy to 74 years by 2018.

The study, released Tuesday, noted that in 2010, life expectancy in Russia was lower than in 120 countries ­ including China, Ukraine and Britain ­ and that people spent more years in “good health” in 111 other countries, among them Germany, Romania and Slovakia.

Premature death due to alcohol consumption in Russia rose 40 percent from 1990 to 2010, and smoking was a key contributing factor to disease in Russia.

Ischemic heart disease, stroke and lung cancer remained the top three causes of death in Russia from 1990 to 2010, while the number of deaths related to HIV/AIDS, self-inflicted injury and alcohol-induced cirrhosis increased. Deaths from stomach cancer, chronic obstructive pulmonary disease and road injury went down.

The study attributes the poor progress in life expectancy in Russia in part to higher incidence of HIV/AIDS, which did not even appear on the list of the top 10 causes of disease in the country in 1990.

Yury Krupnov, head of the supervisory board at the nongovernmental Institute of Demography, Migration and Regional Development, called the findings “rather well-known” and said they coincide with other similar surveys.

He said the underlying reasons for the increased incidence of heart attack, drug addiction and alcoholism need to be analyzed because they are “the core of the problem” and argued that these reasons are often social, economic and political, as opposed to purely medical.