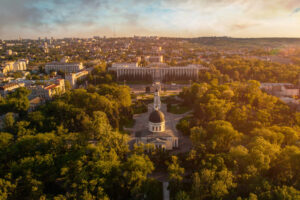 “The legislative elections in Moldova were well-organized,” said Russian lawmaker Yaroslav Nilov, who headed the election-monitoring mission of the Commonwealth of Independent State (CIS) during Moldova’s July 11 vote. “From the point of view of voting procedures, the observers had no doubt about the legitimacy of the results.”

It was one of the vanishingly rare occasions when the assessments of Russian and Western election monitors about a vote in the former Soviet Union were in nearly complete accord.

The elections marked a historic victory for the pro-European Party of Action and Solidarity (PAS), for the first time in Moldova’s post-Soviet history giving a single center-right party a solid majority in the 101-seat legislature.

That win, coupled with PAS founder Maia Sandu’s resounding victory over Socialist incumbent Igor Dodon in the presidential election last November, has given the impoverished country “the most pro-EU government in Moldova’s history,” which could “open the door for reform,” according to U.S. think tank Stratfor.

The flip side of this result: Significant defeats for the country’s pro-Moscow political forces, particularly Dodon — who has expressed admiration for Russian President Vladimir Putin and met with him several times — and the Socialists.

Far from signaling a decline in Moscow’s interest in Moldova, however, analysts say that, when it comes to Russia’s role and interests, the elections were evidence of the Kremlin’s dissatisfaction with Dodon and its desire to influence Moldova without assuming responsibility for the economy of Europe’s poorest country.

Vladimir Socor, an analyst with the Jamestown Foundation think tank in Washington, says a big hint regarding Moscow’s thinking can be found by looking at the voting in the pro-Russian breakaway region of Transdniester.

Socor adds that Russia’s strategy in Moldova has evolved into seeking “a blocking stake” in the country’s politics, rather than trying to corner a controlling interest by “ensuring the victory of pro-Russian forces.”

There are indications that Dodon has become a spent political force in Moldova, says analyst Igor Botan, director of the Chisinau-based Association for Participatory Democracy think tank. He argues that Dodon’s shift away from traditional socialism toward a Putin-like brand of amorphous, pragmatic conservatism has alienated much of his party’s traditional electorate.

“The Socialist Party, once it embraced the ideology of conservatism, was no longer a left-wing party,” Botan said. “As for the Communist Party, which claims to be a Marxist party, big questions remain. We remember that, when they were in power, the Communist Party launched the idea of the liberal revolution in Moldova. There are big problems here in terms of consolidating what we conventionally call ‘the left.'”

“This shows that the segment identified as ‘the left,’ in fact, has no ideological or geopolitical pivot that could make us confident of this political force as the opposition in parliament,” Botan said.

The nascent Civic Congress movement, founded in 2019, attempted unsuccessfully to pick up the mantle of the left and failed to win any seats in the new parliament.

Vadim Pristrinciuc, a former lawmaker and director of the Chisinau-based Institute for Strategic Studies, adds that Dodon undermined his own support in the ethnic Turkish region of Gagauzia, which is traditionally staunchly pro-Russian and fearful that pro-European politicians are plotting to unite Moldova with Romania.

“Dodon and the Socialist Party made very specific promises to Gagauzia and didn’t follow through,” Pristrinciuc said, citing issues related to autonomy and economic development. “In Gagauzia it is better not to promise anything than to promise and not deliver.”

“We must admit that it is a collapse for Igor Dodon as a political leader,” analyst Botan summarized.

From Moscow’s point of view, Socor says, after setbacks in the 2019 legislative elections and the loss of the 2020 presidential ballot, “Dodon is an inveterate loser.”

At the same time, the once stark divide between Moldova’s pro-Russian and pro-European electorates has become much vaguer as the generation that lived under the Soviet Union has become less influential.

“The profile of the electorate has changed,” Pristrinciuc said, “and based on that I don’t think they are still willing to bet on purely pro-Russian parties. They will flirt with pro-European ideas.”

And the pro-European PAS must contend with the fact that much of its electorate expects the government — while combating corruption and implementing systemic reforms — to maintain good relations with Moscow.

While searching for a new, more viable political force to back in Moldova and maintaining its powerful grip over breakaway Transdniester, Moscow will likely “demonstrate a maximum openness for constructive relations with the new government and President Maia Sandu — at least at the beginning,” Socor said.

And that initial impulse toward “maximum openness” appears to be mutual, according to a statement by PAS leaders.

“We said from the beginning that we did not enter politics to be against anyone,” PAS legislator Virgiliu Paslariuc told RFE/RL on July 14. “We want to work together with everyone.” He added that relations with Russia will be based on “pragmatism.”

Socor argues that Moscow does not want to take primary responsibility for Moldova’s “economic maintenance” and is unwilling to further exacerbate relations with the West over the tiny country during Russia’s own legislative election year and in view of the “complicated” situation in Ukraine.

“Moldova is not of strategic interest to Russia,” he said. “Russia has a gradual agenda, and Moldova is not a priority at this time. Russia wants to keep Moldova in a gray area with a so-called multi-vector or balanced foreign policy.”