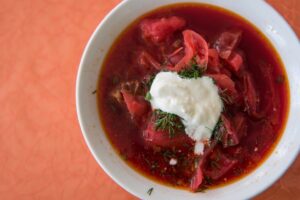 “Borshch has long been a staple of Ukrainian cuisine and Kyiv officials now hope to … secur[e] UNESCO recognition of the soup’s Ukrainian roots. … In early October, the Ukrainian Ministry of Culture moved to add the hearty soup to its list of intangible elements of Ukrainian cultural heritage. Ultimately, Ukraine hopes to secure international recognition as the historic home of borshch … another step in Ukrainian efforts to distance itself from Russia, whose narratives on history, culture, language, and even the culinary arts often overshadow or overlap Ukraine’s on the world stage. …”