From Polar Bears to Nuclear Weapons, U.S. and Russia Still Talk (Even If It’s Past Each Other)

A popular talking point for many watchers of U.S.-Russian relations is to warn that reduced communication between the two countries, caused by the enduring animosities between Moscow and Washington, are increasing risks of a misunderstanding that could cause the world’s two nuclear superpowers to stumble into war. The experts, such as Sam Nunn and Ernest Moniz, certainly have a point. The less Washington and Moscow communicate, the greater the risk of misinterpreting each other’s actions in a way that could lead to a conflict, which could ultimately escalate into a nuclear war. You would be surprised, however, how much the U.S. and Russia still communicate both on government and non-government levels in spite of the animosities. At least that’s the impression I got when I looked into it, compiling a list of such communications1. From checking on each other’s strategic nukes to co-managing polar bear populations, the U.S. and Russia are still talking to each other, even though they might be talking past each other.

However, many U.S.-Russian communications channels have been impeded/suspended, including: 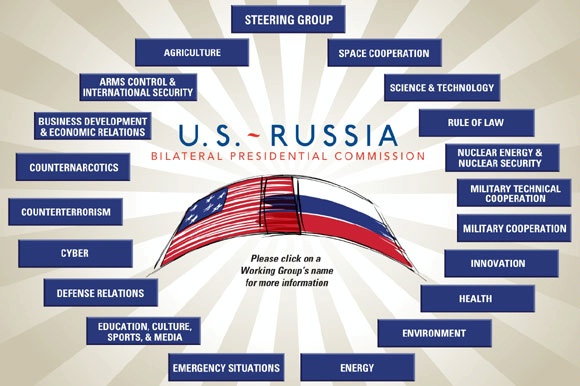 As the list above demonstrates, the U.S. and Russia are still talking to each other, though not as extensively as they used to during U.S. President Barack Obama’s short-lived reset policy. Would expanding and intensifying lines of communication help reduce risks of a deadly conflict and normalize relations between the two countries in general? Yes, of course. However, unless the sides manage to reconcile their differences over such thorny issues as election meddling and the Ukraine conflict, I would not bet on it in the near future, regardless of who occupies the White House next January.

Article also appeared, with different images, at russiamatters.org/blog/polar-bears-nuclear-weapons-us-and-russia-still-talk-even-if-its-past-each-other, with different images, bearing the notice: “© Russia Matters 2018 … This project has been made possible with support from Carnegie Corporation of New York,” with a footer heading entitled “Republication Guidelines” linking to: russiamatters.org/node/7406, which bears the notice, in part: