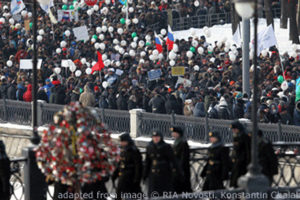 The most likely and immediate consequence of mass protests be they against the construction of a church as in Yekaterinburg, against building dumps for Moscow trash as in the Russian North, or against border changes as in Ingushetia will be the dismissal of governors and even mayors where such demonstrations occur, Vera Chernysheva says.

Mayors are easier to get rid of, and firing them has the virtue from Moscow’s perspective of minimizing the protests. Firing a governor, even one whose rating has dropped precipitously, has the unintended and unwelcome effect of signaling that the demonstrations have claimed a major political victim, she suggests, something the Kremlin certainly doesn’t want to do.

She bases her conclusions on the Petersburg Politics report concerning developments in the regions during the last month. Its authors say, she related that “protest activity has turned out to be painful for the administrative system,” largely because officials lack the skills needed to handle protests when they occur.

The mayors and governors have come to believe that any concession to protesters is an admission of weakness and a threat first to themselves and then to Russian statehood, the report continues. As a result, they aren’t willing to make even “rational” moves unless or until they receive a signal from the Kremlin that it is all right to do so.

That has had the effect of allowing what should have been small problems to mushroom into larger ones. The inability of officials to respond in a politically sophisticated way is also limited by the fact, Petersburg Politics says in its report, by the fact that so many of them are recent appointments from the outside and simply don’t know the areas they are working in.

The problem, of course, is this: if Moscow fires these people and inserts even more from the outside, the new officials will be even less capable of dealing with the situation politically and will behave in ways that will likely lead the demonstrations to grow still further, transforming what should be municipal issues into regional and all-Russian ones.

Consequently, Putin’s preferred method of “solving” problems almost certainly will have the effect of making them worse.