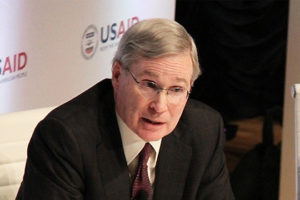 “… according to Stephen Hadley, former national security adviser to … George W. Bush … three crucial factors need to be addressed before rebuilding the [U.S.-Russian] relationship can begin. … [1] ‘One, we get through our election in November and it is clear that the Russians have not tried to manipulate that election in 2018 the way they did in 2016’ …. [2] the second factor was closely tied to … Mueller’s investigation into connections between Russia and members of the Trump campaign. Once ‘the results of his investigation are known … and that whole issue gets through our political process,’ both the White House and the American electorate can ‘close the door’ … [3] The third major obstacle[:] … ‘… we need to begin to make progress on one issue in particular, and that is Ukraine’ … ‘the reason for the sanctions on Russia that has so accelerated the deterioration in the relationship.’ … “