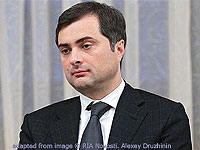 “We are convinced that there is a need to investigate both crimes committed by Ukrainian officials and the role of Russian high-ranking officials in the events in Kyiv’s Maidan. I can confirm that we have already prepared all necessary documents, and Mr. Surkov was in Ukraine on February 20-21 [2014] for some reason. Today the investigation is working to establish why he and Mr. Yakymenko, former SBU head, visited one of the SBU facilities on February 20-21, used the government’s phone line and traveled to the presidential administration,” Nalyvaichenko told a session of the Ukrainian parliament’s committee for the fight against corruption on Wednesday.

Ukrainian President Petro Poroshenko said on February 20 officers of the SBU Alpha special force have testified that the teams of snipers who shot and killed protestors during the February 2014 events on Independence Square in Kyiv were coordinated by the Russian president’s aide Vladislav Surkov.

In commenting on statements by Ukrainian officials alleging the presence of “a Russian trace” in the Maidan events and Surkov’s alleged role in them, Russian Foreign Ministry spokesman Alexander Lukashevich called them “ravings.”