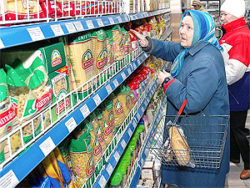 For the first time since 2008 Russians are spending more than half their monthly income on food, as falling real incomes force them to buy only basic necessities, a study published Tuesday revealed.

In February, Russians spent 50.1 percent of their earnings on food products, including alcohol and tobacco, according to the study by the Institute of Social Analysis and Forecasting Institute at the Presidential Academy of National Economy and Public Administration.

According to the authors of the study, the last time that Russian expenditure on food exceeded spending on non-food items was during the crisis years of 2008-2009.

“In poorer households, the majority of the budget is spent on food products,” the study said.

In 2015, the poverty rate grew to 19.2 million people or 13.4 percent of the population, the highest number seen over the past nine years, according to Rosstat state statistics data, the Interfax news agency reported.

According to one of the authors of the report, Maria Ivanova, the share of food expenses will continue to grow in Russia in 2016.

“The reasons will remain the same: the continued decline in real incomes and therefore the primary consumption of essential goods,” Ivanova told the Kommersant newspaper.