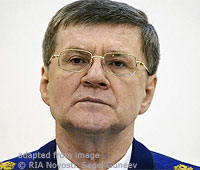 Chaika’s calls for more oversight have come amid debates in wake of a controversial law that was approved by President Vladimir Putin last year and forced NGOs with foreign financing to register as foreign agents. The law has already forced one NGO, an elections watchdog called Golos, to close earlier last month, and has resulted in searches of some 2000 organizations.

“Gaps in vague interpretation of legislation [lead] to lack of [oversight over] NGOs,” Chaika said on Wednesday during a session of the Federation Council, Russia’s upper house of Parliament, in St. Petersburg, RIA Novosti reported.

NGOs that are not registered as foreign agents undergo government checks only once in three years, which is ample time for them complete tasks set by foreign sponsors, Chaika said.

Under the NGO law approved by Putin last year, NGOs funded from abroad and engaged in political activities are required to register as foreign agents, or face fines of up to 500,000 rubles ($16,000) for NGOs and up to 300,000 rubles ($10,000) for directors of NGOs. The bill was initiated after the Kremlin claimed that foreign organizations were financing political activity in Russia, particularly the mass protests that broke out in 2011.

During a meeting with Putin on Tuesday, Chaika said that 215 NGOs were uncovered that were foreign agents but refused to register as such, Associated Press reported.

Chaika said on Wednesday that his agency has asked the courts to shut down three organizations over evidence they were involved in “terrorist and extremist activity.”

Two of the lawsuits have been upheld, one against a Moscow organization and another against a group in Kirov. Chaika did not name the organizations.

Searches also uncovered 20 violations of tax regulations among NGOs. He named a St. Petersburg charity that is part of the Memorial Human Rights Society as being suspected of improper use of foreign funds allotted for aiding senior citizens.

Memorial denied the accusations. “The sum [of 400,000 rubles cited by Chaika and allegedly misappropriated] doesn’t come from anywhere,” Galina Shkolnik, head of the Memorial charity organization, told The Moscow News. “Just over 350,000 rubles were spent on medication for senior citizens, but that has been accounted for.” She added that infractions were uncovered over unlicensed storage of medication, but those have been taken care of, while charges of misappropriations were never made.

“We can make changes together to make it more transparent, understandable and enforceable,” RIA Novosti quoted her as saying.

The Presidential Human Rights Council said it hopes to meet with Chaika and have a chance to ask questions about his report on the results of the searches, RIA Novosti quoted Yelena Topoleva-Soldunova, director of the Council’s NGO Development Commission, as saying.

Statements like those made by Chaika have a negative effect on society, Irina Flige, director of the St. Petersburg Memorial Human Rights Society told The Moscow News.

“They make the idea of total control of everyone over everyone sound normal,” she said. Interference in their work increases as a result, often paralyzing their activity.