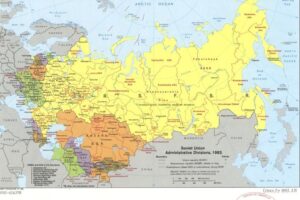 MOSCOW. Aug 18 (Interfax) – Former Soviet President Mikhail Gorbachev blames the organizers of the coup attempt of August 1991 and the signatories to the Belavezha agreements for the collapse of the Soviet Union, calls for defending the principles of democracy, and believes that Russia can develop and solve any problems only on a democratic path.

“I believe that the lessons of those days remain relevant today. The public and the authorities should always seek to defend the principles of democracy and law-governed state and to rule out any possibility of usurpation of power and adventurous actions. I believe that the democratic development of Russia is the only correct path, this is the only way our country can develop and solve any problems,” Gorbachev said in a statement on the eve of the 30th anniversary of the coup attempt of August 1991.

The coup attempt of August 1991 failed but “it complicated and weakened the position of the Soviet president and created conditions that made it extremely difficult to carry on the effort towards preserving the Union,” Gorbachev said.

“Republics [comprising the USSR] adopted declarations of independence. Yet there was still a change to preserve the Union on a renovated basis. Another blow was deal in December: it was the Belavezha agreement of the heads of Russia, Ukraine and Belarus who announced that the Soviet Union ceased to exist,” he said.

“The coup attempt organizers tried to make excuses and claimed they sought to preserve the country, but their reckless move had catastrophic consequences. They bear a huge part of responsibility for the collapse of the country,” Gorbachev said.

He said he had expressed his view on the events of August 1991 on multiple occasions.

“When the coupists isolated me in Foros, cut every kind of communication and sent their representatives to me, I categorically rejected their demand to sign an order on the state of emergency. I called their actions criminal and reckless. I said in a statement addressed to the Congress of People’s Deputies and the Supreme Council that the actions of [the State Committee on the State of Emergency] GKChP aimed to deceive people and to usurp power,” Gorbachev said.

“The reckless action of the coupists was doomed thanks to the firm stance of the Soviet president, the Russian president, and courage of thousands of Muscovites and numerous public figures and deputies. People did not want the old order to be restored. Democratic institutions created during perestroika passed the test in general,” he said.

“The coupists repeatedly changed their ‘version’ of the events as time passed. First they repented, and then followed the advice of one of the conspirators, who said they should ‘blame Gorbachev for everything’. But facts are facts. They have been established by the investigation into the GKChP case and are irrefutable,” he said.