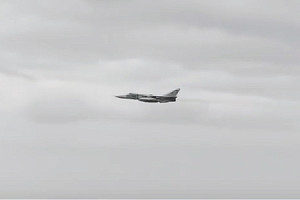 “The Russian fighter crew consistently approached the air targets from a safe distance and identified them as a U.S. Air Force RC-135 reconnaissance aircraft and a U.S. Navy P-8A Poseidon base patrol aircraft,” the center said.

“After the reconnaissance aircraft turned away from the national border of the Russian Federation, the Russian fighter safely returned to base,” it said.

“The whole flight of the Russian Su-27 was carried out strictly in accordance with the international rules for the use of airspace. Violation of the Russian Federation’s border by the American reconnaissance aircraft was not allowed,” the center said.

The Russian military earlier reported similar intercepts over the Black Sea on July 23, 24, 27, and 31 and on August 5, 7, and 9. Each time, the interception was carried out by a Su-27 fourth-generation fighter (designed by Sukhoi, part of the air defense patrol forces).

On August 7, the Russian military said that three Su-35 fighters had flown out to intercept a B-1B American strategic bomber over the waters of the Sea of Okhotsk.

[featured image is file photo of an SU-24 from a different Black Sea incident on another occasion, adapted from a U.S. Navy video]