Virtually every city and province is honoring the writer.

On this day in 1821, Fyodor Dostoevsky was born in Moscow into the family of an army doctor  who worked at a hospital for the poor. After finishing school in Moscow, Dostoevsky joined the army and studied engineering in St. Petersburg, where he was captivated [by] — or perhaps invented — the city’s dark allure. He published his first novel, “Poor Folk,” in 1845. Four years later he was arrested for being in a literary club that discussed banned books critical of the authorities; he was sentenced to death, but the sentence was commuted just moments before he was to be shot. He spent four years in a prison camp and another six years of compulsory military service. 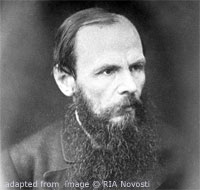 Dostoevsky worked as a journalist and publisher; he traveled through Europe; he gambled addictively. And he wrote. In the end he produced 12 novels, four novellas, more than a dozen short stories, and reams of non-fiction, journalism, and other prose, most of which explored human psychology, theology, illness, and some of the darkest acts and inclinations that human beings have.

He is one of Russia’s greatest writers, and his bicentenary has been marked and celebrated all around Russia for most of 2021 with almost every city and province holding exhibitions, new or revived theatrical productions, talks and lectures, and even special restaurant menus.

Here are a few ways that his legacy is being honored this year.

In St. Petersburg  in addition to dozens of talks, lectures, quests, and discussions in libraries and schools, you can see five different theatrical productions, including “Rodion’s Attic” based on “Crime and Punishment” (billed as how Roskolnikov broke bad); several exhibitions, notably one of images of and from Dostoevsky in art held in the Russian Museum; and a revamped permanent exhibition at the Dostoevsky Museum.  More information here. A conference called “Dostoevsky and World Culture” is being held at Pushkin House; you can watch the plenary session on hereYouTube. On Nov. 12 an exhibition “I am Dostoevsky” opens at the Mikhailov Palace.

In Moscow at Moscow House of Dostoevsky Museum – the apartment at the Mariinsky Hospital for the Poor where the writer lived 1823-1837– you can take a virtual tour.  The museum space has remained unchanged: no walls were removed or changed over the last 200 years, and even the heating stoves are the same ones used when Dostoevsky was a boy.

Moskino is showing six films of Dostoevsky’s works at theaters in the capital. You might not be able to see them, but do check out the film notes and look for them on other platforms. The Ilya Glazunov Museum is holding an offline and online exhibition of Glazunov’s paintings of works by Dostoevsky.

The website culture.ru has made five versions of works by Dostoevsky available online. The films, series and theatrical productions were made from 1973 (“The Village of Stepanchikovo” performed at the Gorky Theater in Moscow) to “Demons” made in 2014 and starring Sergei Makovetsky. They also mention Akira Kurosawa’s 1951 film “The Idiot,” but don’t provide a link. Most noteworthy is the  2003 television series of “The Idiot,” directed by Vladimir Bortko, who has a knack for historical dramas, and a truly all-star cast including Yevgeny Mironov, Vladimir Mashkov, Inna Churikova and Oleg Basilashvili. All free. To start watching, see the site here. If you have trouble logging on, try YouTube.

Listen to works by Dostoevsky

Nineteen cafes and restaurants in four ancient Russian cities – Novgorod, Borovichi, Valdai and Stara Russa – are serving a special menu of dishes either mentioned in Dostoevsky’s prose or noted in the diary of his wife, Anna Grigorievna, as the writer’s special favorites. The dishes include salmon in a cream sauce, pork medallions wrapped in bacon with roasted diced potatoes and nut sauce. More information can be found here and here.