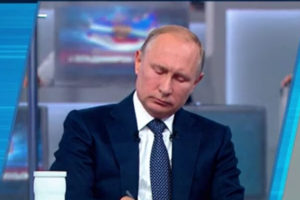 The Russian public’s trust in President Vladimir Putin has dropped below 50 percent for the first time in five years, according to a survey by an independent research body.

The results come as popular discontent grows over a planned pension reform that would set the retirement age past the life expectancy of some Russians. Thousands across the country have taken to the streets to protest the reform.

On Tuesday, a poll from the independent Levada Center showed a 12-point drop in trust levels toward Putin, down from 60 percent in January to 48 percent in June.

The poll asked respondents to name politicians whom they trust.

The pollster last registered a dip below 50 percent in Putin’s ratings in 2012 and 2013. In 2012, the year Putin was elected to his third term as president, his rating was at 37 percent.

Putin’s average trust rating stands at 56.5 percent, with the Levada Center documenting trust in Putin hitting a peak of 64 percent over the past four years.

Respondents in June’s Levada poll named Prime Minister Dmitry Medvedev as the politician they distrust the most. Trust in Medvedev, who made the controversial announcement of Russia’s plans to raise the retirement age while public attention was focused on the opening of the football World Cup on June 14, was at 9 percent.

The Levada survey was carried out between June 22 and June 26 among 1,600 people in 52 Russian regions.

Other polls have found similar levels of falling trust in the Russian president.

The state-run VTsIOM pollster reported that trust in Putin dropped by nearly 10 percentage points from June 3 (45.7 percent) to June 24 (38.3 percent)

VTsIOM last saw Putin’s trust levels fall below 50 percent in April, from a high of 58.9 percent in January.