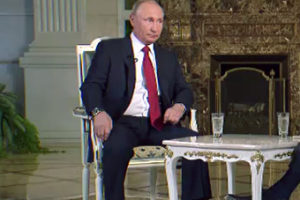 A recent state-funded survey said that public trust in Putin has dropped to its lowest level since 2006. The same survey showed Putin’s approval rating grow from 61 percent in January to 65 percent this month.

“We’re waiting for some analysis by our respected specialists on how these data correlate. How can trust level fall, but [approval] rating rise?” Putin’s spokesman Dmitry Peskov was quoted as saying by Interfax.

Valery Fyodorov, head of the state-funded VTsIOM pollster whose results raised the Kremlin’s eyebrows, later explained that two distinct methodologies were used to arrive at both indicators.

While around two-thirds of Russians approved of Putin’s job as president, he told Kommersant FM, fewer people named him outright when asked to identify politicians they trust the most.

“It would be a big exaggeration to say that trust in politicians is limited by those who remember them unprompted,” Fyodorov said.

Another state survey conducted at the request of the Kremlin said that less than half of Russian respondents would vote for Putin if elections were held this weekend.