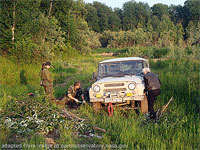 “The idea of a government corporation was discussed and I know that far from everyone shares this approach,” Putin said at a State Council meeting to discuss the social, economic and demographic development of the Trans-Baikal area and the Russian Far East. “I’m ready to return to this issue,” Putin said.

“We have no right to consider the Far Eastern regions exclusively as raw materials-oriented, we need to ensure their modern and balanced development,” he said. “I propose setting a zero rate for federal profit tax during the first ten years of the operation of new production facilities. This should apply to industrial enterprises with investment of at least 500 million rubles ($16 million),” he said.

The Far Eastern regions should also be allowed to take similar measures regarding regional profit tax, he added.

Solid mineral deposits may be exempt from the subsoil tax for ten years with investment of over 500 million rubles, Putin said.

The construction of refining facilities should become a precondition for companies to get licenses for major hydrocarbon deposits, Putin said, adding the government should consider creating clusters for hydrocarbon extraction and refining.

Putin also said the Russian Far East Development Ministry had failed so far to justify its title as “there is erosion of responsibility in the ministry and failures in its work.”

Putin instructed the government to step up measures to develop the Russian Far East and monitor budget spending to that end.

“We need to get rid of the situation when problems are resolved inadmissibly slowly, when considerable financial and material resources that are allocated are washed away and the approved plans frequently never make it off the page,” he said, adding the government should conduct this monitoring on a permanent basis.

“If the fund proves its efficiency, we’ll continue replenishing its capital up to…100 billion rubles,” he said.

The capacity of the Baikal-Amur mainline (BAM), construction of which was launched in the late 1970s to supplement the Trans-Siberian rail road (Transsib) and provide Russia with a second rail connection from Siberia to the Asia-Pacific region, should be expanded, he said.

“I propose discussing the prospect of increasing the throughput capacity of both Transsib and BAM, and also the basic vehicular roads of the Far East and Trans-Baikal.”

Putin callef for Russia to build additional electricity transmission lines in the Far East, including along BAM and Tanssib, create electric grid facilities for the accelerated implementation of the Eastern gas supply program and other strategic energy projects.

“We need a weighted approach to selecting investment programs, we need infrastructure projects that can yield a multiplier effect tied to the development of territories,” he said.

A bill setting out creation of the state corporation, dubbed “Far Eastern Republic,” was finalized by the Economic Development Ministry in April. The mega-corporation was expected to be partially exempt from federal legislation and be subordinate only to the president.

The corporation was intended to cover 16 regions encompassing more than 60 percent of Russia’s territory and have the power to distribute mining licenses bypassing state tenders, which are obligatory elsewhere in the country. This includes many prominent ore deposits, among them Sukhoi Log, the country’s biggest gold deposit.

The project was slammed by ex-Finance Minister Alexei Kudrin as detrimental to the country’s investment and business environment.

“These plans immediately cross out the target for Russia to jump to 20th place in international ‘doing business’ ratings from the current 120th position,” Kudrin said.