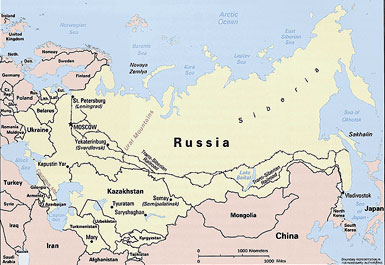 (Window on Eurasia – Paul Goble – Staunton, June 12, 2014) The Russian Federation, by focusing on the construction of “oligarchic capitalism,” essentially “threw all the union republics” to their own fates, and as a result, the governments and peoples have turned away from Moscow and ethnic Russians are fleeing back to Russia, thus further undermining Russian influence.

That harsh judgment, one that combines concerns about empire and social system, is offered by Aleksandr Dokuchayev, the head of the diaspora and migration department of the Moscow Institute for CIS Countries, in an interview published yesterday by Pravda.ru (pravda.ru/news/world/formerussr/other/11-06-2014/1211796-russkie-0/).

While he draws these broader conclusions about what he clearly sees as Moscow’s failure and the results of that failure across the entire region, Dokuchayev devotes most of his attention to the status of ethnic Russians in the former Soviet republics in Central Asia where Russian flight is continuing and Moscow’s influence is certainly less than it was.

Dokuchayev considers the situation country by country. In Turkmenistan, Russians are leaving because of uncertainty about their ability to retain dual citizenship, something Ashkhabad and Moscow agreed to but that each side has taken steps that make the future of that status more problematic and that has led to mutual acrimony.

“Unfortunately,” the CIS expert says, “the Russian Foreign Ministry still cannot push this issue” as it should have because of course it involves “not simply compatriots but citizens of Russia” who should be able to expect that Moscow will defend their freedom to move back and forth between Turkmenistan and the Russian Federation.

Moreover, while there are Russian classes in Turkmen schools, they are few in number and Russians living there are “threatened with assimilation.” Ashkhabad isn’t interested in joining the Customs Union, and consequently “those who can leave will do so from Turkmenistan.”

The situation in Uzbekistan, he says, is “stable” with Russian schools and Russian classes, “but in general whose children are growing up seek all the same to have them study” not in Uzbekistan but in the Russian Federation.” Just now, Dokuchayev says, Moscow is gathering statistics on this trend.

Asked about the pulling down of a Soviet war memorial in Tashkent, the researcher said that like “practically all post-Soviet states, national Uzbek statehood is being built on the rejection of our common past — more than that, not simply rejection but the cultivation of a negative image” of that past.”

That pattern is to be found elsewhere in Central Asia as well. In Kazakhstan, for instance, there are no plans to celebrate this year’s 60th anniversary of the Virgin Lands program which transformed much of that republic. In Kyrgystan, Russian continues to be used in offices and businesses, but it is gradually being driven out of day to day conversations.

And in Tajikistan, where very few Russians remain and most of those are elderly, the ethnic Russians in the first instance need aid to help them survive if not to rise out of their current poverty, Dokuchayev says. That is something Moscow should be doing everywhere but instead, it continues to neglect these people.

Ukraine should be a wake-up call for the Russian government and the Russian people. What happened there would not have happened had Moscow shown a greater interest in and support for Ukrainians. But what happened happened because “Russia while building its own oligarchic capitalism essential threw all the union republics out” to sink or swim.

Not surprisingly, they are “swimming” but away from Russia rather than towards it, the CIS specialist says. There has been a certain shift recently, but it is “clearly insufficient.” As a result, “of course, we are losing.”