With regard to Russian military construction in the Arctic:

“[Says] Russian Defense Minister Sergei Shoigu … ‘Since 2013, we have built 545 installations on over 710,000 square meters under Far North conditions. No other country in the world has carried out such massive construction on the Arctic latitudes'”

Apparently with regard to broader Russian military infrastructure: 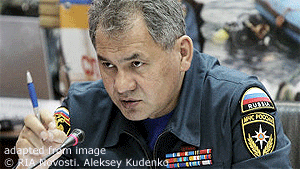 The geography of construction of the Defense Ministry infrastructure … [ranges] from Kaliningrad to the Kuril Islands and from southern military bases to the Arctic,’ Shoigu said. … 10,480 buildings and structures have been built for … in the past five years … ‘The bulk of these efforts focused on creating forces and means of nuclear deterrence, an airfield network, a naval base system, and comprehensive storage arsenals’ [and] [i]n 2018 the ministry is planning to build over 3,600 buildings and structures … for 117.6 billion rubles … [with] 93.9 billion rubles … spent on building special and military facilities, in particular for storing new weapons and military equipment ….”

[featured image of Shoigu is file photo from another occasion; map is file image highlighting permafrost]